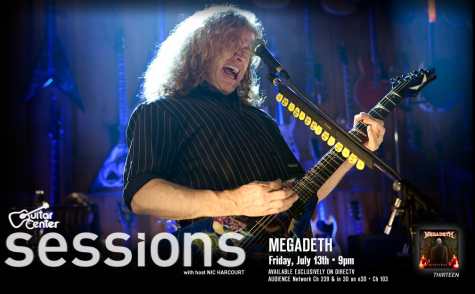 Guitar Center, the world's largest retailer of musical instruments and equipment, and DirecTV , one of the world's leading providers of digital television entertainment services, will spotlight MEGADETH in a new episode of the award-winning music series Guitar Center Sessions on Friday, July 13. Guitar Center Sessions features exclusive performances and intimate, enlightening conversations conducted by revered musical tastemaker Nic Harcourt. The episode was filmed at Guitar Center in Hollywood, California on March 22 and will premiere in 2D hi-definition on DIRECTV's Audience Network (channel 239) and in 3D on DirecTV's n3D powered by Panasonic.

A BLABBERMOUTH.NET-exclusive clip of MEGADETH performing the song "Angry Again" from the upcoming Guitar Center Sessions episode can be seen below.

Check out photos from the taping at this location.

Continuing its commitment to inspiring musicians, each episode of Guitar Center Sessions is filmed live in front of a studio audience in the world-famous Guitar Center Hollywood Vintage Room. The show gives real music fans a rare peek inside the minds of their idols, with Harcourt's thoughtful, conversational questions drawing out new and intimate details from their storied careers. Audiences hear first-hand accounts from each artist about their personal and musical journeys and the influences that molded them into the icons they have become.

After its series debut, featuring episodes with artists including Peter Gabriel, WEEZER, JANE'S ADDICTION, THE CULT, CAKE and Jakob Dylan, Guitar Center Sessions was the recipient of the International 3D Society's award for Best Music Television Series in 2010.