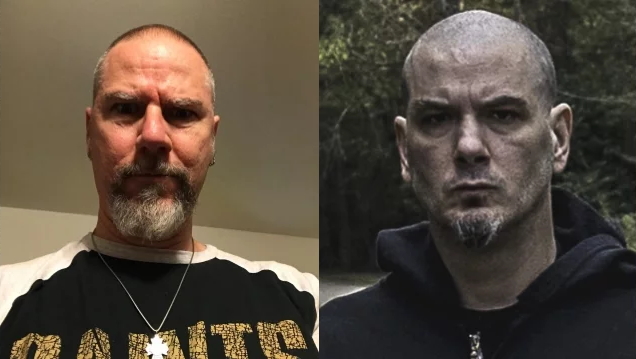 EXHORDER's KYLE THOMAS On PHILIP ANSELMO: 'There Is A Mutual Respect And An Influence That We Probably Have On Each Other'

In a brand new interview with Nick Perkel of Aquarian Weekly, vocalist Kyle Thomas of New Orleans-based thrash metal pioneers EXHORDER was asked if he was aware of his band's influence on PANTERA's decision to move from a power metal act to a more aggressive form of thrash. He responded: "A lot of that had to do with Phil's [Anselmo] presence and influence. He was from [New Orleans] and sang with RAZOR WHITE, and [then] joined PANTERA. Even before they made their change with 'Cowboys From Hell', the 'Power Metal' album was a significant leap for them [Laughs]… It's probably my favorite PANTERA record. He was also a big fan of ours, but also instrumental in helping us build our popularity in the Dallas/Fort Worth area because he was such an influential person there. He listened to our demo. He turned a lot of people on to us. I'm grateful to him for that. We remain friends to this day. There is a mutual respect and an influence that we probably have on each other."

Last month, EXHORDER parted ways with its founding guitarist Vinnie LaBella. The remaining members of the group later issued a statement saying that they will fulfill their "touring and recording obligations for 2020 and beyond."

Thomas is now the sole remaining founding member of EXHORDER, which released its first album in 27 years, "Mourn The Southern Skies", last September via Nuclear Blast Records. The band is rounded out by Jason Viebrooks (HEATHEN) on bass, Marzi Montazeri (ex-SUPERJOINT RITUAL, PHILIP H. ANSELMO & THE ILLEGALS) on guitar and Sasha Horn (FORBIDDEN) on drums.