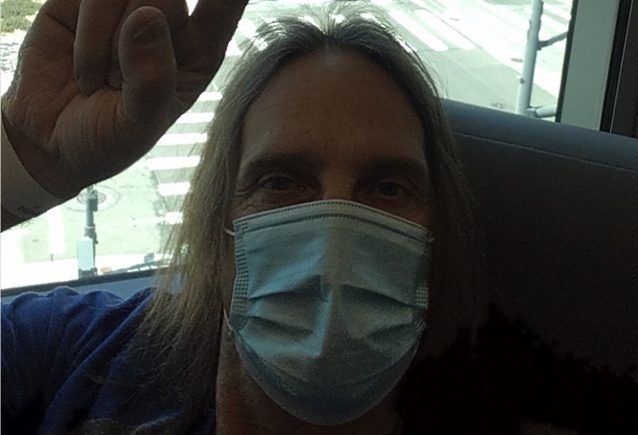 EXODUS Drummer Begins First Round Of Chemotherapy For Cancer Treatment

Earlier today, the official EXODUS Instagram shared a photo of the drummer flashing the "devil horns" at the hospital, and included the following words from him: "Getting my 1st Chemikill Concocted Cancer Killing Cocktail!! Thank You ALL for your support!! —Tom #fansrule #family #thrashmetal #goingtobeatthis #fuckcancer".

The 56-year-old musician revealed the diagnosis in a statement released on Tuesday (April 13). He said: "Today I will be starting treatment for a squamous cell carcinoma. It's a gastric tumor that was diagnosed in my upper stomach in February.

After Hunting went public with his diagnosis, EXODUS guitarist Gary Holt said that the band will "delay" the release of its recently completed new album, "Persona Non Grata", "so that when Tom has defeated this, he will be back to full strength to hit the road and pummel his drums like only he can! When he has kicked cancer's ass like we know he will, we will resume kicking YOUR asses with the sickest record yet!" he said.

"Persona Non Grata" will be the follow-up to 2014's "Blood In Blood Out", which was the San Francisco Bay Area thrashers' first release since the departure of the group's lead singer of nine years, Rob Dukes, and the return of Steve "Zetro" Souza, who previously fronted EXODUS from 1986 to 1993 and from 2002 to 2004.