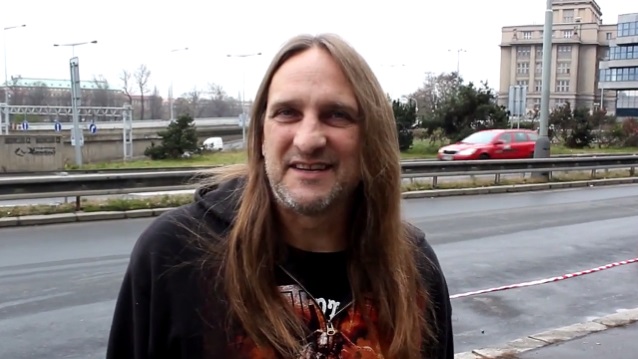 Drummer Tom Hunting of San Francisco Bay Area thrash metal veterans EXODUS was interviewed on the latest edition of "The Classic Metal Show", which is heard live on Saturdays from 9 p.m. to 3 a.m. EST at TheClassicMetalShow.com. You can now listen to the chat in the YouTube clip below.

On EXODUS' split with the band's singer of the past nine years, Rob Dukes, and the return of Rob's predecessor, Steve "Zetro" Souza:

Tom: "I love Rob and I'm super proud and I stand by the music we made with Rob; it's some of the best… It helped us form a new sound of EXODUS, to kind of mix with the old. And I love the music that we got to make with him. It was amazing."

On Internet speculation regarding the exact reasons for the split with Rob Dukes:

Tom: "This is a brotherhood, and we're all grown men now. The days of mudslinging and all that are over. And as far as all the trolls that hang out on Blabbermouth, I think it's a certain… 'Cause I don't really read that or do social media like that. I don't partake in Blabbermouth or Facebook or any of that shit. But a lot of it was hurtful. I mean, Rob's got thick skin, and Zetro does too, but a lot of [the Internet speculation] was assumption and hurtful. I read it for one day, and that was the day [Rob's departure and Zetro's return were] announced, and I never went back. I thought the comments were stupid and childish. And I don't think it's our true fans, 'cause I think it's… If you look at the other [sites like] Loudwire or whatever, it's the same 150 people that are eating Hot Pockets and living in mom's basement. It's, like, go outside, go kiss a girl. There's a lot bigger things out there that people should do with their lives than assuming what's going on. And I'm not gonna sling any dirt, but that day kind of bugged me [to read some of the comments]… Everybody can spit it out [in online comments], but I don't think it was everybody that was spitting it out. Like I said, it was the same 150 people who… I mean, why else can people comment so quickly on something they don't know anything about rather than they're just hanging out on that site waiting for shit to happen."

On EXODUS' forthcoming album, "Blood In, Blood Out", tentatively due in late October via Nuclear Blast:

Tom: "The album's sounding really good and heavy. We worked really hard on it. This is the longest we've ever spent on an album cycle, regardless of the changes that we've been making. We've never spent three months on album. It has nothing to do with Gary [Holt, guitar] playing with SLAYER [when he is not doing stuff with EXODUS]; it's just that we wanted to take our time on this one and make it special. 'Cause this is studio album No. 10. I don't really count the 'Let There Be Blood' one, 'cause that was remakes [of the songs from EXODUS' 1985 debut, 'Bonded By Blood']. But as far as brand new EXODUS material, it's No. 10, and it's super important to all of us. I'm happy to be in a band that's actually been around long enough to make 10 albums, even though I didn't play on all of them."

On how EXODUS managed to work through all of its differences with Steve "Zetro" Souza and make way for his return to the band:

Tom: "I'd say we've all grown as people and communication within the band has improved. This is a pretty passionate sport we do, and it's emotional. I don't know about the dynamics of other bands, but in our band, it's very much a brotherhood. I mean, we love each other, regardless of what we ourselves might even say in the media. I think Zetro's coming back, so far it's been super healthy. He sounds great, he's singing great, attitudes are really good. I think as far as our past, I think as we've all grown as people, so has communication within all of us. You can't not tell somebody stuff if you're feeling it, and I think as we're growing older, we communicate better."

On whether Zetro's work with HATRIOT during the singer's time away from the band had anything to do with Souza's return to EXODUS:

Tom: "You know what?! I'm really not that super familiar with what's going on with HATRIOT. I think he's got a killer band around him. I mean, two of them are his kids. Some people breed to make slaves for the family; he bred to make a band. I think that's awesome. But from what I did hear from the HATRIOT stuff, I liked it. I also liked the work he did on the TENET record; I thought that was some of his best singing ever. I mean, he's a lucky guy to be in his 50s… Anybody who's still able to do this and do it at a high level as we all get older, it's pretty awesome. It's a sign that, I guess, we kind of know what we're doing."