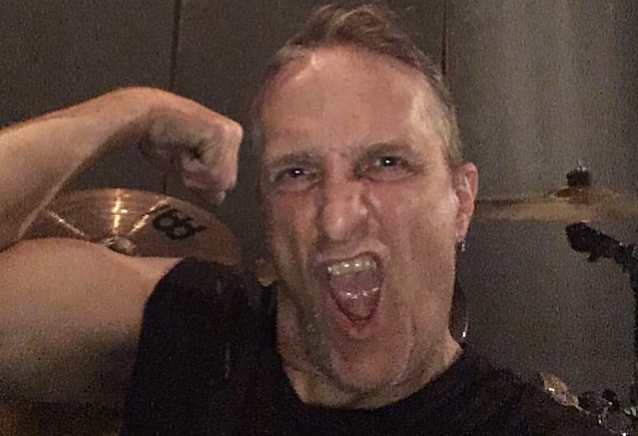 EXODUS drummer Tom Hunting will undergo a total gastrectomy next week, less than five months after he started treatment for squamous cell carcinoma (SCC) of the stomach.

Earlier today (Monday, July 5),Hunting shared the following update on his health: "Hey Y'all, I wanted to check in and thank everyone SOOOOOO much for the love and support! I see all the awesome events and things people are putting together out there to help me in this fight. I really am overwhelmed with gratitude and feel so blessed to be a part of this community we all share in. I really believe that angels are out there walking around that don't even know it, then shit gets rough and crazy, and they answer the call and jump into action. All of you are these!!! You all help me visualize being on the other side of this. FUCK CANCER!!!

"Speaking of fucking cancer, the treatment is working. I've had 4 now and the mass has shrunk to less than half the size it was in March.That's amazing progress! I've added the weight back I lost at the start of this. Clinically, these are all good signs. From the start, this could've gone in a really bad direction, but everything the doctors at UCSF laid out has all gone according to plan in turning things around. I'm very grateful to these unsung heroes!

"I'm slated for surgery 1 week from today on July 12th. Unfortunately it'll be a full gastrectomy, but the good news is I'll get to live which is definitely NOT overated. After recovery, I get 4 more treatments, then I can resume my life cancer-free.

"I can't wait to travel the world, playing music, enjoying every moment of this crazy journey!! I'll check in soon again and share how thing's are going. THANKS AND MUCH LOVE TO EVERYONE!!! CHEERS!!!!"