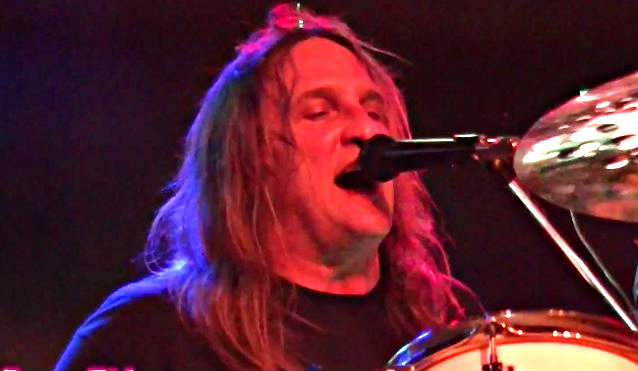 Video footage of QUINTANNICA — the band featuring guitarist Doug Piercy (formerly of HEATHEN and ANVIL CHORUS) and drummer Tom Hunting (of EXODUS) performing the BUDGIE classic "Melt The Ice Away" and the ANGEL WITCH song "Atlantis" live at the Jon Torres memorial show on December 7 at 23 Club in Brisbane, California can be seen below (courtesy of Capital Chaos TV).

Veteran San Francisco Bay Area heavy metal musician Jon Torres, who played bass and guitar for a number of the region's most acclaimed cult acts, including ULYSSES SIREN, HEATHEN and LÄÄZ ROCKIT, died in September as a result of a reported heart failure.

At the time of his death, Torres was married to REPULSA vocalist Tambre Bryant. They have a daughter, Cassandra.

In a 2006 interview with Earth-Dog, Torres spoke about why he felt ULYSSES SIREN never achived the same commercial success as some of their peers, such as TESTAMENT and EXODUS. "There are many reasons, in my opinion," he said. "I'd have to say the number one reason was alcohol and substance abuse mixed in with a heaping dose of testosterone added to the toxic soup. Second: SIREN never had the contacts and or management that some of the other bands had, and even if we did, we probably would have fucked that up as well. Also, we had a real love-hate relationship involved between members."

Torres also talked about his time with LÄÄZ ROCKIT and how he became involved with the cult Bay Area thrash metal act. "I got a tryout with LÄÄZ through my longtime friend Walter Morgan," he said. "I'd had enough of SIREN and Walt asked me if I'd like to try out. At first, I flat out told him no. I had never really liked the band. The first record was good but when I heard 'Annihilation Principle', I changed my opinion. Good record. I auditioned and got the gig."

He continued: "I could write a book about the 2 1/2 years I was with LÄÄZ. I'll give you the short version for now. I had a blast with LÄÄZ. The tours and the vids and records were a great time and learning experience I'll never forget."