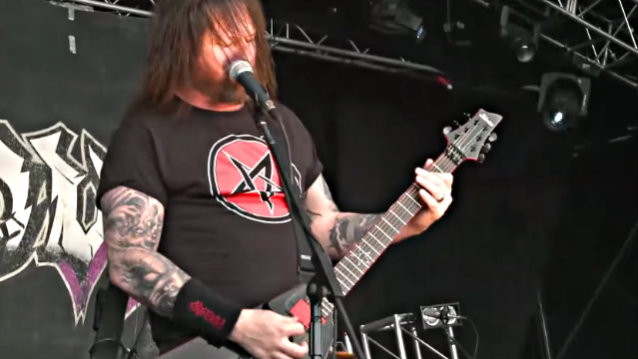 Patch.com: Can you tell us about the writing and recording process for [the new EXODUS album] "Blood In Blood Out"?

Gary: We never really think about what an album will sound like ahead of time. It's a super-organic process. I just start up writing, and if a song ends up ten minutes long or four minutes, so be it. We were super excited about making this album. It had been a long time. The time presented itself and we just worked our [butts] off. It was very old-school in how we went about it. Usually we set up shop in a large rehearsal complex. For this one, we did it basically in [drummer] Tom Hunting's laundry room where he lives out on this goat ranch, which is where we tracked everything but the drums. I think we made a really remarkable record. We're a band that loves doing this and I think it shows in the energy in the record. We just go for it. We love playing thrash metal.

Patch.com: During the recording process you brought [singer] Steve Souza back into the band. What prompted Steve's return and what does he bring to the album?

Gary: We were already underway with the vocal process when we came to the decision that things weren't clicking [with former singer Rob Dukes] and we had to make the change. The first thing we did was have a conversation with Steve to see where his head was at. He was 1,000 percent into giving this thing a shot. From there, we gave him a new song and let him sing it. It sounded so natural. He just grabbed the reins and ran with it. It was a perfect fit.

Patch.com: What does the album title, "Blood In Blood Out", mean to you?

Gary: It's just the fact that we have been bleeding this since the beginning. We are one of the world's oldest-standing thrash bands and we're still shedding blood for this. We're still standing and we're still vibrant and putting out high-energy, quality records.

Read the entire interview at Patch.com.