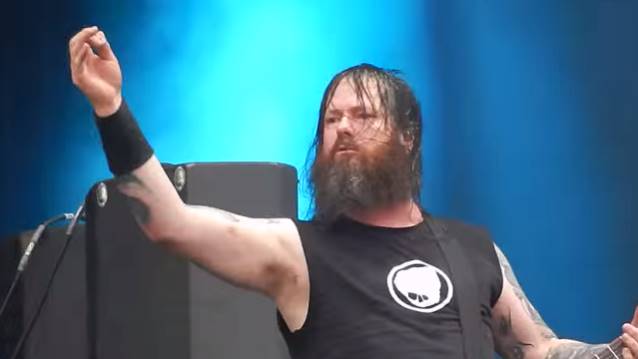 In a recent interview with Full Metal Jackie, EXODUS guitarist Gary Holt spoke about the the recent arrest of James Evans, a 31-year-old EXODUS fan, who was detained for making "terroristic threats" after he posted the lyrics to the band's song "Class Dismissed (A Hate Primer)".

"It goes to show you that we live in a very paranoid society, and in a lot of ways rightly so, because of so many tragedies — non-stop shootings and such," Holt said "But my problem with James Evans being arrested primarily lies in the fact that it would've taken, like, 20 minutes of research to realize that this guy was not a threat. He wasn't a depressed 17-year-old posting diatribe after diatribe on Facebook about how bad he hates his school and hates his classmates and then the posted lyrics, and I'd see it. He's a 30-year-old man, and I bet if you searched his Facebook page, you'd find nothing but other metal references and typical Facebook stuff. It does show you that the written word can be frightening to some."

Evans posted the following on Facebook on August 24: "Student bodies lying dead in the halls, a blood splattered treatise of hate. Class dismissed is my hypothesis, gun fire ends in debate."

According to 14News.com, multiple agencies received calls concerned about the post, resulting in Evans' arrest.

The warrant said Evans was arrested because, "he threatened to kill students and or staff at school."

Evans was placed in the Muhlenberg County Detention Center for eight days before being released on September 3.

According to Billboard.com, local police officers showed up the day of Evans' original Facebook posting at his house in Central City, where they asked him if he planned on harming anyone. "I assumed the conversation got resolved," said Evans. The next day, the officers returned to his house while Evans was at work, asking his wife what kind of car he drove and if he was in possession of any weapons.

"They informed her that I may or not be charged," he said. "They said they were going to talk to me at work, but they never showed up. I didn't think it was that big of a deal." The following morning, officers showed up at his workplace and issued Evans a warrant for his arrest.

"They never even cuffed me, just put me in the back of the car," he said. "They knew I wasn't dangerous. They were kind of shocked, too, because they thought it had been resolved. They just had to serve it because it was in their jurisdiction."

EXODUS subsequently issued a statement, saying, "EXODUS does not promote or condone terrorists, threats or bullying." EXODUS guitarist Gary Holt continued, "James Evans was simply posting lyrics to a band he likes on Facebook, and he was locked up for it. The song 'Class Dismissed (A Hate Primer)' was written as a view through the eyes of a madman and in no way endorses that kind of fucked up behavior.

"It was the Virginia Tech massacre perpetrated by Seung-Hui Cho that was the subject and inspiration to write the song, one in which we put the brakes on playing it live after the Sandy Hook shooting, as we did not want to seem insensitive... When we start to overreact to things like lyrics by any band, including EXODUS, and start arresting people, we are caving in to paranoia and are well on our way to becoming an Orwellian society."

All charges against James Evans were dismissed after the American Civil Liberties Union (ACLU) of Kentucky took his defense, presenting the case as a First Amendment issue.

"The First Amendment exists to protect people from government censorship of unpopular, but otherwise lawful, speech. And there is no greater threat to our ability to exercise that right than to be thrown in jail for doing so," said ACLU's executive director Michael Aldridge in a statement.