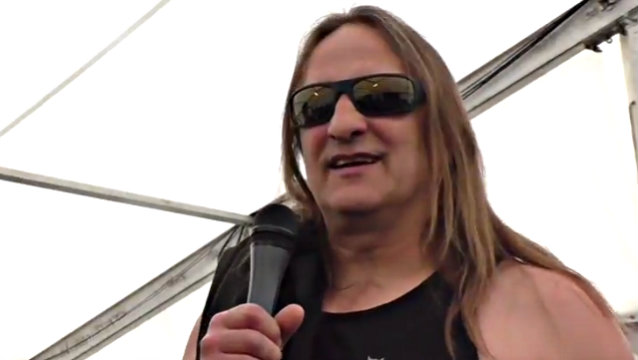 EXODUS Has 'Five Or Six' Songs Written For Next Album, Says TOM HUNTING

EXODUS drummer Tom Hunting spoke to the "Mike James Rock Show" at this weekend's Download festival about the progress of the songwriting sessions for the band's follow-up to 2014's "Blood In Blood Out" album. He said: "We're just structuring songs right now. I think we've probably got five or six maybe, and the makings for the rest of 'em — bits and pieces here and there."

When asked if EXODUS writes any music on the road, Hunting said: "We kind of do that now a little bit. I mean, Gary's [Holt, guitar] making riffs right now. He's out [on the road] with SLAYER, and we're out here doing this run. And then we connect back home. We're playing with IRON MAIDEN on July 1st [in San Bernardino, California]."

"Blood In Blood Out" was EXODUS's first album since the departure of the band's lead singer of nine years, Rob Dukes, and the return of his predecessor, Steve "Zetro" Souza, who previously fronted EXODUS from 1986 to 1993 and from 2002 to 2004.

EXODUS's main songwriter Gary Holt has been the touring guitarist for SLAYER since January 2011 when that band's co-founding guitarist Jeff Hanneman contracted necrotizing fasciitis, also known as flesh-eating disease, from a spider bite in his backyard. Hanneman eventually died in May 2013 from alcohol-related cirrhosis of the liver.

When Holt is unable to take part in EXODUS touring activities due to his commitments with SLAYER, he is being replaced by HEATHEN guitarist Kragen Lum.

Souza recently told Metal Wani that EXODUS would likely enter the studio in late October or early November to begin recording its new disc for an early 2018 release.