The sequel to EXODUS's best-selling guitar book is finally here. "Pleasures Of The Frets: The Guitar Anthology Volume 2" features guitar tab and notation for 12 killer songs from the EXODUS catalog. All songs were transcribed note for note from the original recordings by EXODUS's touring guitarist Kragen Lum (also of HEATHEN) and Ernie Ball's "Match The Master" award winner Evan Bradley. Learn how to play the songs exactly as the band plays them with these 100% accurate transcriptions. Presented in two-guitar format so you can learn to play every riff and solo just as Gary Holt, Rick Hunolt and Lee Altus played them on the albums. Includes a foreword by EXODUS guitar legend Rick Hunolt. 256 pages.

Pre-order now and download your digital copy or eBook immediately. 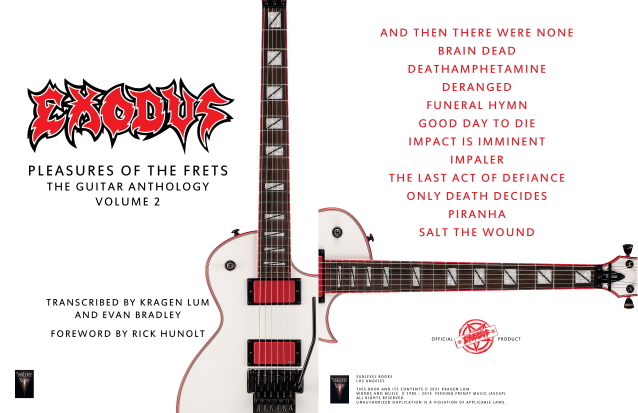