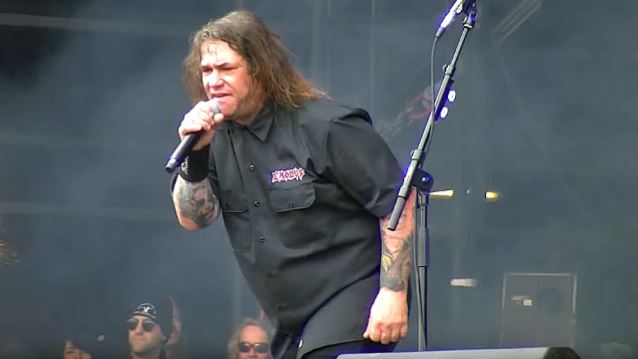 EXODUS singer Steve "Zetro" Souza spoke to That Drummer Guy (a.k.a. Josh Rundquist) about the progress of the songwriting sessions for the band's follow-up to 2014's "Blood In Blood Out" album. He said (hear audio below): "We're writing right now. We obviously have to pay attention to SLAYER's schedule, because our main guy [EXODUS guitarist Gary Holt also] plays in SLAYER, so we have to pay attention to that. But I think they're coming to a bit of an end [of their touring cycle] where he's gonna have some time. And he's already gotten together with Tom [Hunting, EXODUS drummer] in the early part of this year and put some songs together. So it's definitely there. We're looking, probably, November, December, January — something like that — to get into the studio."

Zetro said that he generally waits for the music to a new EXODUS song to be completed before he begins writing lyrics to it. "I think it's always worked better for me that way," he said. "And this gives Gary a good chance to listen to the song musically and know what direction lyrically he wants to go. So even though I may write the lyrics, he may come up with the idea."