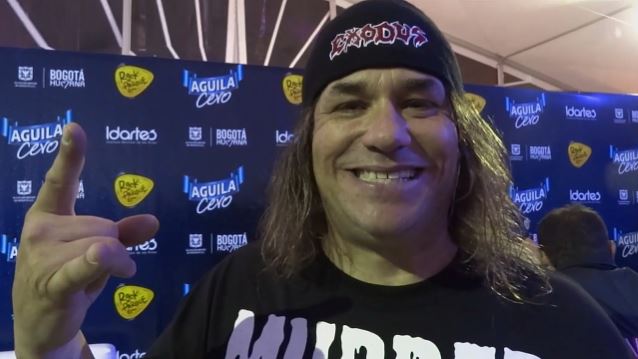 "So Gene is right. People don't pursue it. And you're gonna tell me rock and roll is MAROON 5. Okay?

"So you know what? I kind of agree with Gene a little bit; I do.

"We were just talking about 'The Midnight Special'. That was a show in the United States on a Friday night at 12 o'clock when they played a rock concert for an hour and a half. And it could be anybody from FLEETWOOD MAC to Helen Reddy to FOREIGNER… Rock and roll bands. Where's rock and roll today? Where is it? You know where it is? Heavy metal. 'Cause we're the only ones that stayed true and the only ones where our fans kept true. We still keep the rebel image [and] we still keep the rebel bit alive."

EXODUS' new album, "Blood In Blood Out", was released in North America on October 14 via Nuclear Blast.