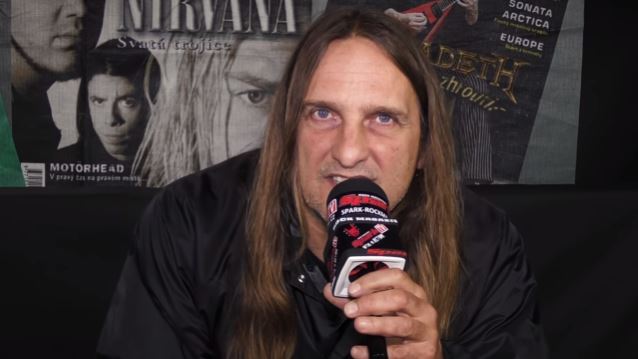 EXODUS To Begin Work On New Material In January

Spark TV, which is part of the Czech monthly magazine Spark, recently conducted an interview with drummer Tom Hunting of San Francisco Bay Area thrash metal veterans EXODUS. You can now watch the chat below. A couple of excerpts follow (transcribed by BLABBERMOUTH.NET).

On the progress of the songwriting sessions for EXODUS's follow-up to 2014's "Blood In Blood Out" album:

Tom: "We're gonna start working on that in January, 'cause Gary [Holt, EXODUS and SLAYER guitarist] gets a break from SLAYER, and EXODUS, the touring cycle in Europe will be done by then. So we're gonna get in a room and start jamming."

On the EXODUS songwriting process:

On whether any new EXODUS material has already been written:

Tom: "It's all in super-infantile stage right now — just guitar riffs. I haven't even heard most of it."

On when EXODUS plans to release the next album:

Tom: "I hope we can something out by 2017 — in the middle, or towards the end of 2017. I wanna take our time, though. It's not really how much material you put out at this point; it's gotta be good. I'm more concerned about it being good than [being released] fast."

"Blood In Blood Out" was the band's first album since the departure of EXODUS's lead singer of nine years, Rob Dukes, and the return of Steve "Zetro" Souza, who previously fronted EXODUS from 1986 to 1993 and from 2002 to 2004.