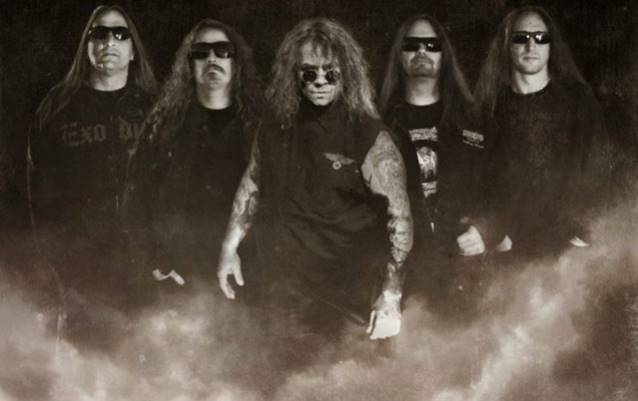 EXODUS To Release 'Blood In, Blood Out' Album In October

San Francisco Bay Area thrash metal veterans EXODUS have set "Blood In, Blood Out" as the title of their new album, tentatively due on late October via Nuclear Blast. The CD will be the band's first since the departure of EXODUS' lead singer of the past nine years, Rob Dukes, and the return of his predecessor, Steve "Zetro" Souza, who previously fronted EXODUS from 1986 to 1993 and from 2002 to 2004.

"I'm very excited to be back," Souza told Chile's Radio Futuro on Tuesday (July 8). "I'm really looking forward to this next adventure with my brothers in metal — these guys I spent 30 years with, on and off. So it's very exciting."

Speaking about how being in EXODUS is different today than it was when he first joined the band in the '80s and even a decade ago, Souza said: "I think everybody's matured quite some bit, and I think, as we all get older, we all realize things that we do wrong, especially myself, we realize our faults and our mistakes. And it's great that everybody can come to a meeting of the minds and be able to work forward and be mature enough to work forward."

He added: "The whole reception to me being back with the guys has been really, really great."

In a recent interview with Australia's "Blood, Sweat And Metal" podcast, Dukes said that he had not talked to any of his former bandmates in EXODUS about his departure from the band. "I haven't spoken with anyone but [drummer] Tom [Hunting]," Rob explained. "Tom called me… He called me and said, 'We're gonna go on with a different singer. We're gonna be going with Zet.' And that was it. It was about a 20-second phone call. And that was really all I got. That's it."

Asked if he had any comment on how Dukes' exit was handled by EXODUS and whether it was true that Rob was fired in a 20-second phone call, Souza told Radio Futuro: "You know, I know nothing about that, and with all due respect to all the fans, I really don't choose to get into that. I just wanna talk positive about the band and move forward. So, again, that was really nothing that I was… I wasn't even privy to that information, so I really don't have any comment on it."

EXODUS guitarist Gary Holt — who has been pulling double duty with SLAYER for the past four and a half years — denied that EXODUS handled the dismissal of Dukes in an insensitive manner, saying "There were the calls to Rob preceding this, [so] how long should the final call be?

"20 seconds was not all this involved.

"[While I was] in Europe [with SLAYER, I] pretty much got the rundown on everything as we went through this."

He added: "Much time was spent on this."

Holt also shot down Internet speculation that the split with Dukes was motivated by financial reasons or that it was masterminded by EXODUS' new so-manager, TESTAMENT vocalist Chuck Billy, who co-founded the management company Breaking Bands LLC. "It isn't for the money [and] Chuck did not orchestrate this," Holt said. "There were issues behind the scenes and we came to a conclusion." The guitarist, however, refused to go into the details of EXODUS' decision to part ways with Dukes, explaining: "All will remain internal. I see no need to air the laundry for anyone."

Holt, who previously said that the decision to fire Rob and re-hire Zetro "was the most difficult decision of our lives, one the entire band made," was once again full of praise for EXODUS' former frontman, saying: "I wish nothing but the best for Rob, [and I] have nothing but love for the man. He will be a force for a long time and I am proud of him and how he went from a dude with a pink mohawk to a vicious thrash vocalist. He is a killer singer and we have total respect for him and love the music we made together."

EXODUS' next live appearance is scheduled for July 11 at the Bang Your Head!!! festival in Balingen, Germany.

Souza left EXODUS ten years ago on the eve of the band's South American headlining tour in September 2004 over what was described as long-standing business and personal differences. Holt subsequently issued a statement calling Souza "human crap" for pulling out the trek "only about twenty-four hours before were ready to leave." He added, "Yes, he did a killer job on the [then-latest] album [2004's 'Tempo Of The Damned'], but mainly because we did not allow him to fuck everything up with his stupid Bon Scott impersonations anymore. We made him sing more like [previous vocalist Paul] Baloff. I tried to make it work. More than you can imagine. But he was (is) the most miserable pile of crap to be around."