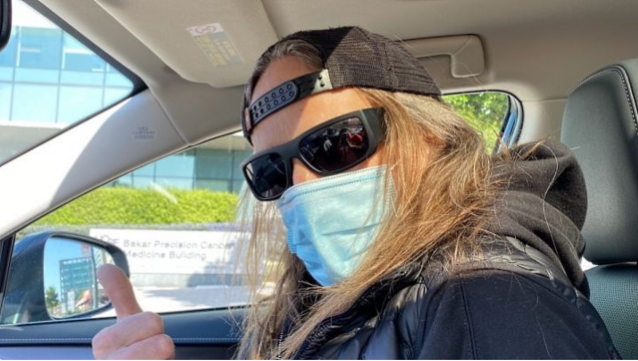 A GoFundMe campaign has been launched for EXODUS drummer Tom Hunting, who recently started treatment for squamous cell carcinoma (SCC) of the stomach.

The campaign, titled "Help Tom Hunting with his cancer battle!," was organized by EXODUS guitarist Gary Holt and created on Tuesday, April 20. In less than 24 hours, the campaign has amassed nearly $4,500 and is now more than $15,000 from hitting the target goal of $20,000. At press time, the campaign has 89 donors, 25 shares and 87 followers.

In an introductory message on the GoFundMe page, Holt writes: "After decades dedicated to laying down the most pummeling drums in thrash, Tom Hunting has been diagnosed with cancer. While he fights and defeats this, he will need help with his bills, both medical and home.

"During this pandemic Tom, like many of us, works to keep himself going while we await the return of touring, but he is unable to do so while undergoing chemo and more to get past this and back behind his drums with his brothers in EXODUS. Whatever someone can afford to give will go miles to helping Tom continue his fight without the worry of the mounting medical bills and bills to maintain a roof over his head.

"Thanks for all your help and support."

The 56-year-old Hunting revealed his cancer diagnosis in a statement released on April 13. He said: "Today I will be starting treatment for a squamous cell carcinoma. It's a gastric tumor that was diagnosed in my upper stomach in February.

"Persona Non Grata" will be the follow-up to 2014's "Blood In Blood Out", which was the San Francisco Bay Area thrashers' first release since the departure of the group's lead singer of nine years, Rob Dukes, and the return of Steve "Zetro" Souza, who previously fronted EXODUS from 1986 to 1993 and from 2002 to 2004.