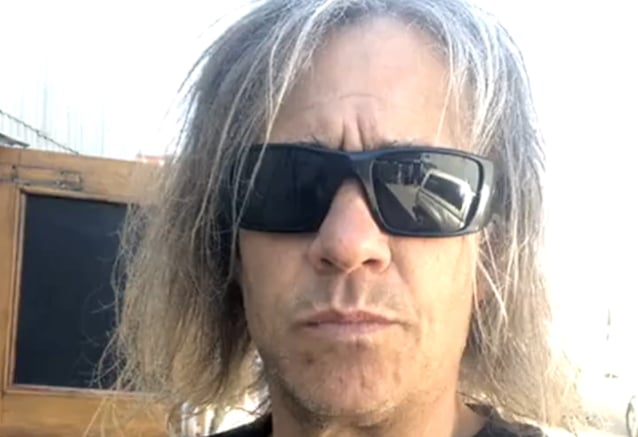 "I have lost 62 pounds," Zetro revealed via his Zetro's Toxic Vault YouTube channel (as transcribed by BLABBERMOUTH.NET). "And I actually wanna lose another 25 pounds. And it's getting harder and harder as I'm slimming up. But there's still room… I've still got a long way to go.

"It's been a lot of hard work," he admitted. "It's almost been a year that I started this journey — May 23rd will be [a year since] I actually started that journey. And I've gotten pretty comfortable with where I'm at right now. It feels good, and I'm gonna be better on stage, obviously, live with EXODUS because of it. So I feel a hundred percent that way."

Zetro reiterated that he is "not finished" with his quest to lose weight. "Every week I have a routine that I do," he said. "I have a certain type of food that I eat. I exercise every single day. I'm at seven miles every day now. So I do seven miles. That's what's helping me out. And I watch what I eat. You just can't eat what you want, and that's just the truth. So everything that I eat — every spoonful, every teaspoon of ketchup — I log, and I know how much it is, and I keep a certain balance of it. I'm not great — there's days where I cheat too, like everybody else — but I have to be honest with you, I keep it really very, very minimal, and I don't think I'm gonna be going back to that ever again. As I'm getting older, it's not healthy."

Souza went on to confirm that he restricts his calorie intake every day. "I don't go over 1,200," he revealed. "It's unfortunate that's the work I have to do, but like drug addicts and alcoholics, I'm the same way with sweets and chocolates and stuff like that."

Zetro and the rest of EXODUS recently completed work on their new album, "Persona Non Grata", which will be released this summer via Nuclear Blast. It will be the follow-up to 2014's "Blood In Blood Out", which was the San Francisco Bay Area thrashers' first release since the departure of the group's lead singer of nine years, Rob Dukes, and the return of Souza, who previously fronted EXODUS from 1986 to 1993 and from 2002 to 2004.