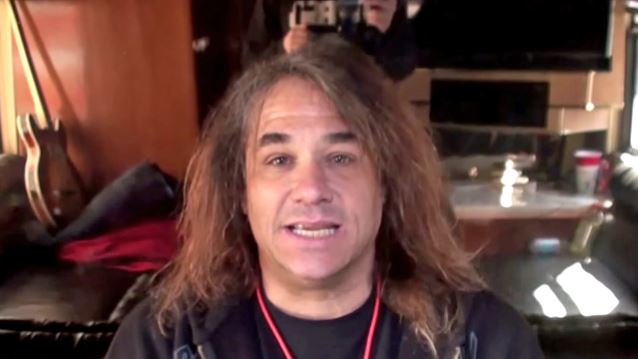 Each episode of Digital Tour Bus's "Dream Tour" features a touring act discussing who they would put on their ideal tour if there were no limits. In this episode, which was filmed on April 11 in Joliet, Illinois, Steve "Zetro" Souza, the vocalist for the legendary thrash metal band EXODUS, talks about his dream tour lineup.

Said Souza: "I think my dream tour would be… Oh, God, it would be AC/DC and THIN LIZZY, just 'cause those are the bands that I've been totally influenced by. And it would be so much fun to go out and see Angus [Young, AC/DC guitarist] just bang his head every single night."

He continued: "We've been very fortunate to play with a lot of our heroes, but that, to me, would be an ultimate dream tour."

"Blood In Blood Out" is EXODUS' first album since the departure of the band's lead singer of nine years, Rob Dukes, and the return of Souza, who previously fronted EXODUS from 1986 to 1993 and from 2002 to 2004.