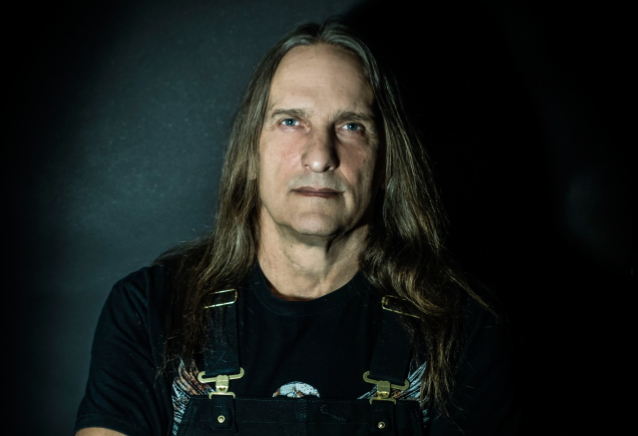 EXODUS's TOM HUNTING Opens Up About His Cancer Battle: 'I Wouldn't Recommend It For Anybody'

EXODUS drummer Tom Hunting joined HELLHUNTER on stage last Saturday night (September 18) at Thee Parkside in San Francisco, California to play the classic EXODUS song "Metal Command". The concert was a benefit event for the 56-year-old musician, who performed live for the first time since undergoing a successful total gastrectomy in July in his battle with squamous cell carcinoma (SCC) of the stomach. Also appearing with HELLHUNTER was DEATH ANGEL drummer Will Carroll, who contributed lead vocals.

Speaking to Reality Check TV after his performance with HELLHUNTER, Hunting said about his cancer battle (as transcribed by BLABBERMOUTH.NET): "I wouldn't recommend it for anybody. It's not the funnest hobby you can ever start. [But] it's looking good [after the surgery]. And I got some good news this week. I don't have to do any more treatments — at least any more chemo treatments."

Hunting went on to say that he is "grateful for the science" and especially appreciative of the fact that the metal community came together and raised funds to assist him in his recovery. He is also eagerly anticipating the opportunity to perform live with EXODUS in support of the band's upcoming album, "Persona Non Grata", which is due in November.

"Now, since I don't have to do chemo treatments, I can rejoin the band," he said. "'Cause chemo's a bitch. Cancer's a bitch, but chemo is really a bitch. Boom, you get one dose and you think you're okay, and then you get another dose, and it kind of compiles from the dose before that…

"We've got work to do," he added. "I'm on the mend, and I'll be a part of that work… I'm looking forward to being on all the tours going forward."

As for how it felt being back on stage for the first time since his surgery, Hunting said: "It was fun. It was kind of a hurdle I had to jum. But it felt good. I wanted to keep going. I almost started out 'Piranha' on those guys, but I didn't wanna be a dick…"

Last month, EXODUS tapped John Tempesta to play drums for the band at Psycho Las Vegas on August 22 in Las Vegas, Nevada and at Full Terror Assault on September 11 at Hogrock Campground in Cave In Rock, Illinois — while Hunting was recovering from surgery. Tempesta was a member of EXODUS from 1989 until 1993 and played on the band's albums "Impact Is Imminent" (1990) and "Force Of Habit" (1992).

"Persona Non Grata" will be made available on November 19 via Nuclear Blast Records. The LP was recorded at a studio in Lake Almanor, California and was engineered by Steve Lagudi and EXODUS. It was produced by EXODUS and was mixed by Andy Sneap. For the third time in the band's history, they returned to Swedish artist Pär Olofsson to create the album artwork.