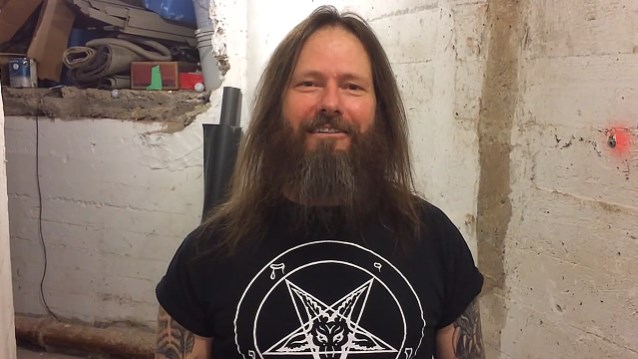 EXODUS and SLAYER guitarist Gary Holt was interviewed on the February 20-22 edition of Full Metal Jackie's nationally syndicated radio show. You can now listen to the chat using the Podbean widget below. A couple of excerpts follow.

Full Metal Jackie: What aspects of "Blood In Blood Out" make you say that EXODUS is at the top of its game?

Gary: "That's always a hard question to answer, because we just try to make albums that we like, you know. And I guess maybe, to that end, we're hard to please ourselves, so, you know, we just try to do what we do and try not to let ourselves down, and, in the end, not let our fans down. And, you know, the album is just killer. It's fresh and it's alive. And that's, I think, the key: Does an album… Does it take on a life of its own or does it seem sterile and forced? And I still love doing this, and I think it shows in the music."

Full Metal Jackie: "Blood In, Blood Out" from EXODUS was the first time original guitarist Kirk Hammett [now in METALLICA] actually played on an EXODUS album. What precedent was set by his original contributions that continued to be a part of the EXODUS sound today?

Gary: "Well, you know, Kirk taught me the [basics] of playing guitar — he showed me my first chords and he showed me my first licks, I hold the pick like he does, because that's just the way I always thought it was done. I didn't think there was another way to hold it, 'cause Kirk showed me that. And he has, you know, always been one of my best friends, and just over the years… [after] really reconnecting in the last few years, he came up and [I asked him], ' Why don't you play on the record?' And he was so excited, just fired up. It's kind of coming full circle. He was able to finally play on a recorded moment with the band he was a founder of, you know. And it was just awesome. It was killer. I was so stoked."

Full Metal Jackie: There's a new SLAYER record coming out this year, your first with the band. What similarity is there in the way SLAYER and EXODUS make albums?

Gary: "Well, the similarities, I think, are in the music. We each have our own particular style. Both of us have been around forever. We're founding fathers of this whole genre of thrash. The way we make albums is drastically different, because, you know, Kerry [King, SLAYER guitarist] and the guys, they just work tirelessly nonstop for, like, months and months on the record. And personally I get real sick of making albums if I spend too long doing it. And EXODUS, we build our own studios all the time. We'll do the drums in a proper studio and then we recorded everything else on the goat ranch where Tom [Hunting, EXODUS drummer] lives. And SLAYER set up shop in a top-flight studio and set up shop there for a long time. Me, once I've recorded, like, a month I'm kind of done. I never consider an album finished anyway; you just kind of abandoned it. But that's also what keeps me striving to make every album better. 'Cause I don't really listen to them once they're done. I haven't listened to 'Blood In, Blood Out' since we finished the mix. I've never put on the CD. The SLAYER album is killer, though. People are gonna be blown away. I went and did nine solos on one day. I kept playing through some wrist pain in my left hand — it was, like, a stabbing pain, a pinched tendon or something — but I kept going, and by the next day I couldn't move my wrist. I was glad I was done, because I couldn't play for a few days. Then Kerry asked me if I wanted to revisit any of them before we wrapped it up, and I listened to them and thought they were killer, so that was the end of that. I guess it's in the mixing stages right now."

Full Metal Jackie: Gary, what things about the way metal has grown and evolved never would have occurred to you as a kid recording "Bonded By Blood"?

Gary: "I would have never imagined that people would still enjoy what we do. When we recorded and wrote 'Bonded By Blood', more specifically, we were just a bunch of lunatics, just out-of-control youths making the kind of music we wanted to hear. And did I think, 30 years later, this album would still be considered some landmark thrash album? No, not at all. I'm surprised anybody even knew who we were. It's good to see metal healthy, especially in this day and age of reduced record sales. It's really hard for younger bands to get anywhere, because there are really no record sales to speak of, comparatively. And I'm blessed to still be doing what I'm doing… knock on wood. [Laughs]"