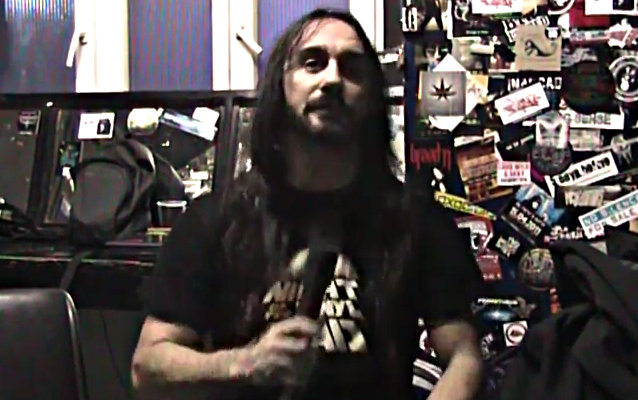 Austria's Stormbringer webzine recently conducted an interview with guitarist Tommy Massara of veteran Italian metallers EXTREMA. You can now watch the chat below.

EXTREMA's latest album, "The Seed Of Foolishness", was released on May 21 via Scarlet Records.

Active in the metal scene for over 25 years, EXTREMA has unleashed a new chapter in its already astonishing career. "The Seed Of Foolishness" sees the band going back to its thrash metal roots, displayed in 10 powerful new tracks which have already been described as some of the best ever written by the band, a relentless touring machine that over the years has shared the stage with some of the biggest names in heavy metal (METALLICA, MOTÖRHEAD, KORN and DEATH ANGEL, to name a few).

"The Seed Of Foolishness" takes its inspiration from a series of events that led to the economic crisis that we are all suffering today, providing therapy for all the anger and frustration resulting from it. "Combat Metal" was how fans and critics alike used to refer to when talking about EXTREMA at the time of their incendiary debut album, "Tension At The Seams", but such definition is more relevant today than ever.

"The Seed Of Foolishness" track listing:

EXTREMA entered Fear Studio in Alfonsine (RA), Italy in May 2012 to begin recording the follow-up to 2009's "Pound For Pound" with producers Tommy Massara (EXTREMA guitarist) and Gabry Ravaglia.

"Between The Lines" video: