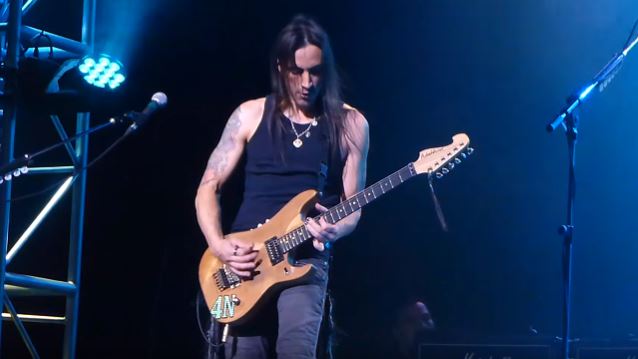 EXTREME Is Working On 17 Songs For Next Studio Album, Says NUNO BETTENCOURT

In a brand new interview with Gearphoria.com, EXTREME guitarist Nuno Bettencourt spoke about the progress of the writing and recording sessions for the follow-up to the band's 2008 album, "Saudades de Rock". He said: "We're about 17 songs into it. We're just wrapping them up. We've got to do vocals, some guitar. Slowly but surely. We're going to release it early next year. Whether that's February or early spring, but definitely not past the spring. This thing is coming out, even if I've got to leak this fucking thing out. We've been recording mostly at my home studio. The guys have been coming out periodically."

Bettencourt also spoke in more detail about the recording process and the gear that he is using during the studio sessions for the new EXTREME album. He said: "I'm trying to incorporate this [signature guitar] N7 that I have — the seven-string. I struggle enough with six strings, but I'm trying to get some different sounds going. In a way, I'm also trying to go back a bit, simplify stuff. I'm not trying to do an album of the past, but I want it to be rock and roll, you know? I think that is what we need more than anything is to get some raw rock and roll out there."

EXTREME's first studio album in thirteen years, "Saudades de Rock" (pronounced "sow-dodge") was released in August 2008 on Open E Records and distributed by Fontana. The European version of the CD included a bonus track, the "Americocaine" demo from 1985, the very first studio recording of EXTREME.

2015 marked the 25th anniversary of EXTREME's classic album "Pornograffitti", the definitive album of the band's career. To mark the anniversary, "Pornograffitti Live 25 / Metal Meltdown" will be released September 23 by the award-winning production company Rock Fuel Media in association with Loud & Proud Records as part of their four-part "Metal Meltdown" DVD series. The concert film captures the Boston band performing "Pornograffitti" in its entirety.

EXTREME released a live CD and DVD, "Take Us Alive", in May 2010 in the U.S. via Frontiers Records. This performance was recorded in August 2009 in EXTREME's hometown of Boston.