A brand new EXTREME track entitled "Comfortably Dumb" has been posted online at this location. The song comes off the reunited Boston hard rockers' first studio album in thirteen years, "Saudades de Rock" (pronounced "sow-dodge"),which will be released in the U.S. on August 12 on Open E Records and distributed by Fontana. The European version of the CD, which is due on August 1, will include a bonus track, the "Americocaine" demo from 1985, the very first studio recording of EXTREME.

"'Saudades' was always a beautiful word to me," Bettencourt explains about the Portuguese album moniker. "It expresses a longing; an underlying sadness for something or someone that's been missing in your life, and never quite sure if it will ever return. In this case, for us, it's rock and roll. Saudades de Rock."

Gary Cherone adds, "I like how it expresses that longing we've been feeling to play for our fans and be together again." 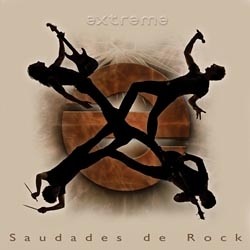 The Boston-bred band's 2008 "Take Us Alive" world tour gets underway on July 29 at The Chance in Poughkeepsie, N.Y. and will be anchored by a hometown gig two days later at the Bank of America Pavilion.

Open E Records is a new label that is distributed by Fontana. A portion of Open E Records' profits will be donated to Music Drives Us, a foundation created as a way to support music in New England. The foundation also gives scholarship money for individuals who desire to continue their musical education.

EXTREME performing on July 11, 2008 at the five-day Rocklahoma festival in Pryor, OK: