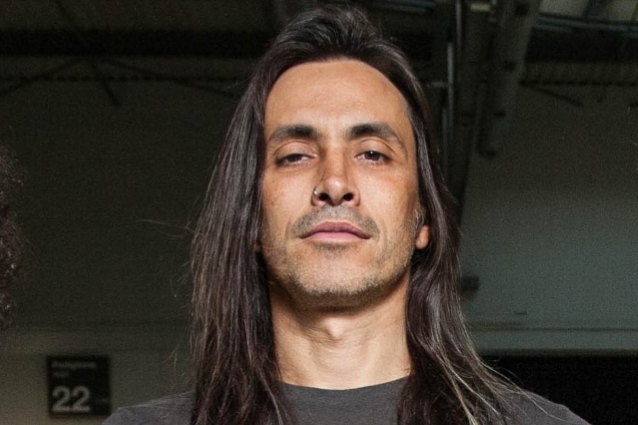 EXTREME's NUNO BETTENCOURT: 'I Pray We Can Stop Hurting One Another'

EXTREME guitarist Nuno Bettencourt has commented on the unrest that has broken out across the country in response to the death of George Floyd.

"Unfortunately, this violent protest, which had 2 men pull up in a car and shoot and kill a good man who was just doing his job... hurting no one, called in from HOME SECURITY...let that sink in...to guard a courthouse. Now dead too..

"Now what.... this one act of violent 'protest' may have just single handidly destroyed or tainted hope of change and canceling out the reason for protesting George Floyd.

"You damn well know George Floyd himself wouldn't have wanted another innocent man with his own family, murdered in his name.

"This will now refuel racist powers at be. .. right when the country had them on the ropes.

"Will there be a hashtag for Patrick Underwood? Or protests in his name avenging his killers No... because his brutal and calculated murder will shine a light on an another serious issue that protesters do NOT want to address and march against.

"I WANT CHANGE. for the better.

"So One minute... the country is all in ... fuck the virus... we're out in streets protesting... and for damn good reason... ENOUGH IS definitely ENOUGH. But then seconds in... we're looting and stealing from our own neighborhoods small businesses...

"I UNDERSTAND THE THE ANGER... CENTURIES OF IT COMING TO A BOIL. ITS TIME. But are we deserved of a new laptop in the name of George Floyd' by punishing our own community. and now we're murdering one of our community's innocent brothers...

"I'm ALL in for racist reform. Police reform. For the sake of the our beautiful Black community. For the sake and love of our good people that are white, Hispanic and Asian, our brothers as well. All of humanity. For the sake of all the NEVER posted about Great Police officers that never get celebrated on posts, that will never get viral posts for doing their job, honorably.

"But... someone help me out here. #patrickunderwood ? @tommorello where u at? This is your expertise.

"I know this is complex... I am at a loss trying to make common sense of it all.

"Protesters, Neighbors, Security, all of us, everyone be safe. I pray we can Stop hurting one another."

Underwood was shot and killed as he and a second officer worked security during a protest over the death of Floyd. A gunman pulled up in a vehicle and began shooting at the two officers in front of the Ronald V. Dellums Federal Building in Oakland. The second officer was wounded, according to the FBI.

.
This is the danger of having a voice as an artist.
I did my best to passionately explain my thoughts, fears and hopes...