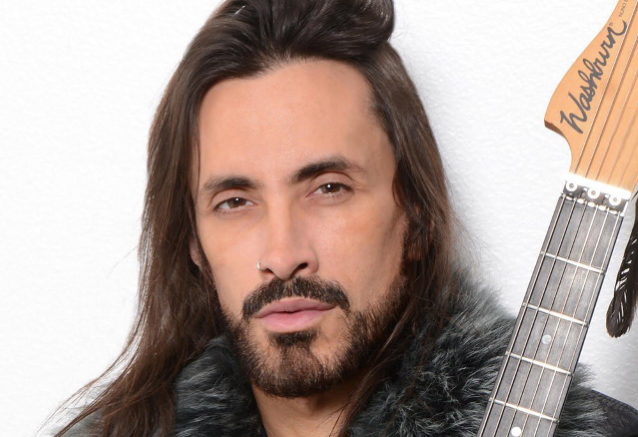 EXTREME guitarist Nuno Bettencourt says that he is working on two new solo projects, including a follow-up of sorts to his debut solo album, "Schizophonic", which came out in 1997 on A&M Records.

"I'm departing on a new and exciting journey. Working on two seperate solo projects. On one of them I have a full album already written and recorded and will form an exciting new band for it.

"I am doing a worldwide search for an incredible singer/frontman , an amazing Rthm section with a killer bass guitarist and drummer that can lock in together and sing bvs as well.

"Please submit a video of yourself killing it on stage and any music performance of you on your instrument or as a frontman performing live at [email protected] Show me what you're all about.

"My second project is ALL ME lol… truly solo and a real departure sonically … somewhat of a SCHIZOPHONIC part 2 for those who know.

Bettencourt rose to rock superstardom as lead guitarist of the legendary rock band EXTREME. He has parlayed that success into an acclaimed career as a Grammy-nominated, multi-platinum artist, songwriter, and producer, working alongside industry titans such as Sir Paul McCartney, Steven Tyler, Kanye West, Robert Palmer, Rihanna, Janet Jackson and Perry Farrell, among others. Nuno is also the CEO and co-founder of Atlantis Entertainment, a full-service media and production company which creates and produces content through ventures integrating film and television, music, branded entertainment, commercials and digital content.

One of many career highlights for Nuno occurred when EXTREME performed, along with members of QUEEN, at Wembley Stadium at the Freddie Mercury tribute concert in 1992. Nuno was also invited to perform at the prestigious Nobel Peace Prize concert with Steven Tyler in 2014 as well as the 2015 Grammy Awards, side by side with Sir Paul McCartney, Rihanna and Kanye West, performing the No. 1 Billboard R&B/hip-hop song "FourFiveSeconds". As a producer and songwriter, Nuno has produced and performed on hit songs with such greats as Rihanna, Robert Palmer, Perry Ferrell and Janet Jackson, as well as currently producing a number of new and exciting, soon-to-be-released emerging pop artists and albums.