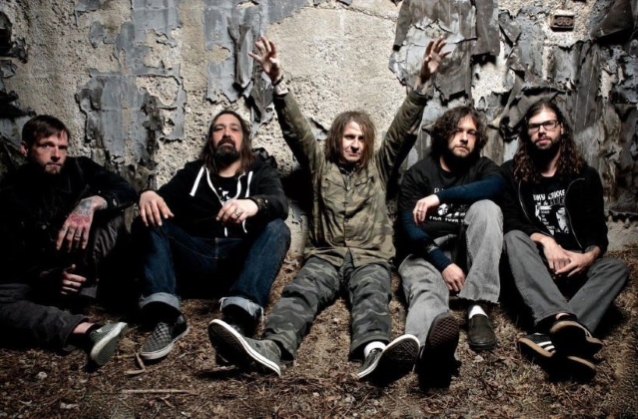 EYEHATEGOD Frontman Fires Back At Lawmaker: 'Your Moral Crusade Against Basic Human Rights Will Be Fought At Every Turn'

EYEHATEGOD vocalist Mike IX Williams has fired back at Arkansas senator Jason Rapert after the ultra-conservative lawmaker took a stand against the band's show in his home state.

A poster for the May 24 concert at Vino's depicts Rapert — who just announced his plans to file a so-called trigger law that would make abortion illegal in Arkansas immediately if the U.S. Supreme Court overturns Roe v. Wade — with bloody fangs and a human baby in his mouth. Rapert reacted to the image on Facebook, urging people to boycott the venue.

"Friends, I rarely share with you the hateful posts and pictures that extreme liberals make about me to torment my stand for better moral values," Rapert wrote. "But this time I want you to see what they have done. They use my image on an event without my permission and they depict me 'biting a baby' in my mouth. A wicked and evil depiction on an event entitled 'Eyehategod'. I call on Vino's in Little Rock to cancel this event and apologize for such a disrespectful image that shows the dehumanization of babies lives. It is disrespectful of all who value babies lives and people of faith. They also clearly welcome the Satanic Temple in another post I am sharing. I urge you NOT to frequent Vinos and stand against their hateful rhetoric."

Earlier today, Williams responded to the senator, blasting the Republican for his radically conservative views.

"Thank you for all the attention you've given the EyeHateGod show in Little Rock, Arkansas. Any image that was used of you is protected under the First Amendment, which supposedly protects us 'Americans.' Please stick to destroying peoples lives by trying to ban same sex marriage, opposing medical marijuana legalization, threatening minorities, and absolutely attacking women's right to choose. Your moral crusade against basic human rights will be fought at every turn."

EYEHATEGOD is continuing to play shows in support of its self-titled 2014 album.

Williams recently confirmed that EYEHATEGOD is in the process of working on material for a new full-length album, tentatively due before the end of 2019.

Longtime EYEHATEGOD guitarist Brian Patton left the band last summer, explaining that touring and being away from his family started to get harder after his daughter was born.

Open letter to Sen. Jason Rapert (R):
Thank you for all the attention you've given the EyeHateGod show in Little Rock,...