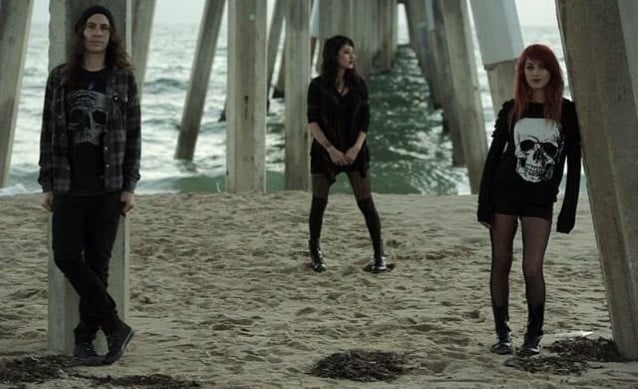 EYES SET TO KILL bassist Anissa Rodriguez has been hospitalized with a blood clot behind her eye. The band's manager, Daniel Vega, writes on the EYES SET TO KILL Facebook page: "[Anissa] is being monitored to determine what the next procedure will be to help assure a safe and speedy recovery. I'm sure you can imagine the severity of the situation and the good thing is she has the best care available.

"This is truly going to be a day-by-day development…

"EYES SET TO KILL were supposed to start their tour with (HED) P.E. yesterday and, unfortunately, were unable to play last night's [Wednesday, July 9] show because of this development. They are not going to be able to play tonight's [Thursday, July 10] show at The Chameleon Room in Oklahoma City.

"The band apologizes to Columbia, Missouri and Oklahoma City, Oklahoma for any inconvenience this may cause and will work on making it up to you real soon.

"Please keep her in your thoughts and prayers!!!"

EYES SET TO KILL's fifth full-length album, "Masks", sold around 2,600 copies in the United States in its first week of release to debut at position No. 161 on The Billboard 200 chart. Released on September 17, 2013 in North America via Century Media Records, the CD was produced by Steve Evetts, who has previously worked with THE DILLINGER ESCAPE PLAN, SUICIDE SILENCE and SEPULTURA, among others.