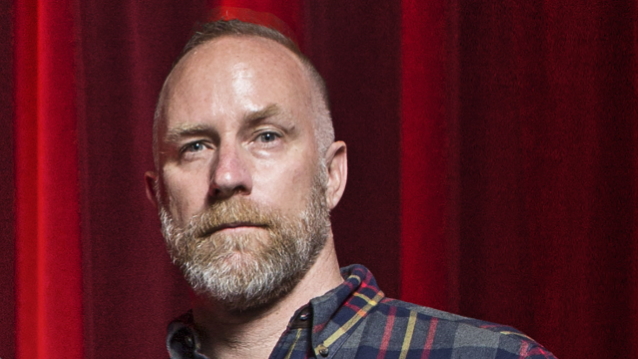 Earlier today, Bottum tweeted out a link to the track, and he wrote in an accompanying message: "I miss you people. I'm starting a daily music share on my bandcamp account. it's real casual but here's track one. LOVE YOUS."

This past May, Bottum released the official music video for "Daddy", the first single from MAN ON MAN, his collaboration with his boyfriend Joey Holman. The song is taken from MAN ON MAN's debut album, which is expected to arrive this summer.

Bottum was one of the first openly gay famous rockers, casually announcing his homosexuality in a 1993 interview for The Advocate with the iconic gay journalist Lance Loud.

"It was preposterous to me that people would have issues with it, but it was a difficult time," Bottum told Tidal in a 2019 interview. "I was in a band [FAITH NO MORE] that was being embraced by bands like METALLICA and GUNS N' ROSES. Really hetero vibes and really over-the-top, sexist, clichéd camps of musical dinosaur vibes."

FAITH NO MORE opened for METALLICA and GUNS N' ROSES on their 1992 stadium tour — a few years after GN'R released the song "One In A Million", featuring the Axl Rose-penned lyrics "immigrants and f****ts/they make no sense to me."

"It was definitely awkward. I don't know if I would be able to do that today," Bottum told Tidal. "If a band like that asked a project I was involved in to open up for them, I think I would be a lot more politically in-tune with being able to say, 'No, thank you.'"

Prior to the coronavirus outbreak, FAITH NO MORE was supposed to return to the road in the spring, five years after the release of the group's acclaimed reunion album, "Sol Invictus".

I miss you people. I'm starting a daily music share on my bandcamp account. it's real casual but here's track one. LOVE YOUS. https://t.co/XNkiaeZ6Be