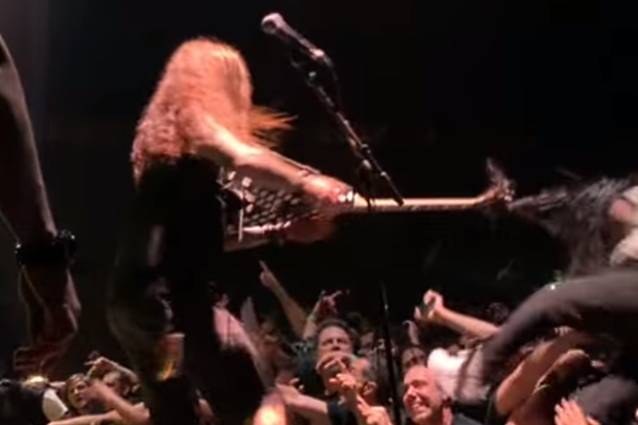 A fan lost some of his hair after it got stuck in the tuning pegs of Phil Demmel's guitar during last night's (May 31) VIO-LENCE concert in Los Angeles, California. The incident happened at the sold-out Regent where the reunited San Francisco Bay Area thrash act was appearing with SACRED REICH.

The fan in question repeatedly stage dove into the audience while VIO-LENCE was performing a set of its classic songs. At one point, the fan got a little too close to Demmel's mic stand and stage monitor, causing the guitarist to briefly stop playing and attempt to push the fan offstage using both his hands. As the fan fell into the crowd, it became apparent that some of his long, black locks got tangled in the guitar headstock, resulting in a "tug of war" of sorts between Demmel and the fan as they attempted to separate the fan from the instrument.

Watch video footage of the incident below.

VIO-LENCE performed its first comeback concert in April at the Oakland Metro in Oakland, California and is currently playing select shows in the U.S. and Europe.

And the award for most hair assembled in a headstock goes to.......

that time you decide to stage dive at the Vio-lence show and all your hair gets stuck in Phil Demmels tuning pegs .. ooops! you lost a good portion of your hair!!! OUCH hahahaha #violence #vio-lence #theregent @phildemmel