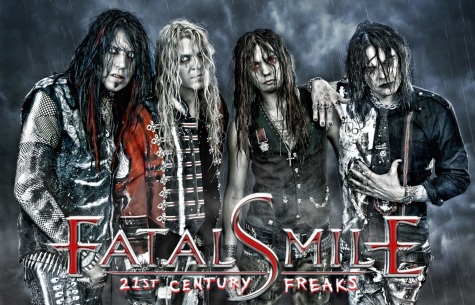 FATAL SMILE To Return With New Album In April

After playing 350 shows internationally during their "World Domination Tour" with such bands as DIO, W.A.S.P., QUEENSRŸCHE, DORO and LORDI in support of their last album, "World Domination", Swedish hard rockers FATAL SMILE spent over a year writing and recording songs for the follow-up effort. Entitled "21st Century Freaks", the new CD was recorded in the tour buses, hotel rooms and studios all over the world before eleven songs were singled out and re-recorded during 2011.

Ten top names tried out for the mixing job, all mixing the song planned as the second single of the album. The band put together a jury of friends to pick out their favorite mix, which turned out to be mix No. 5, not knowing it was mixed by FATAL SMILE's own drummer Philty and guitarist Mr. Y!

According to a press release, "this time [the bandmembers] have done everything on their own to make it the ultimate FATAL SMILE album, from recording and engineering to producing and mixing the album and the result is massive, with 'in-your-face' songs and a 'larger-than-life' sound!"

"21st Century Freaks" was produced by Mr. Y, engineered/recorded by Philty and mixed by the two of them together. The mastering duties were handled by Mats "Limpan" Lindfors at Cutting Room Studios.

The first single, "Welcome To The Freakshow", will be released in March, to be followed by the full-length album on April 27 via Metallville Records. A massive world tour will follow.