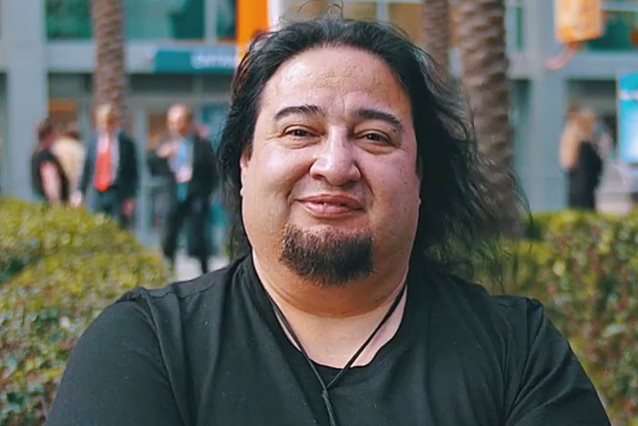 Alto Music conducted an interview with FEAR FACTORY guitarist Dino Cazares at this year's NAMM show, which was held last weekend at the Anaheim Convention Center in Anaheim, California. You can now watch the chat below.

Speaking about the evolution of FEAR FACTORY's sound, Dino said: "Over the years, we've done so much. And when we first started out, our first record, 'Soul Of A New Machine' [1992], we were really trying to discover who we were. 'Cause you heard a little bit of the industrial in there, you heard a lot of the death metal and heard a lot of the grindcore. But lyrically, we were nothing like that. Lyrically, we were trying to sing about where technology's going to take us and what our future's gonna be like. And so once we really found out who we were, we started to do 'Demanufacture' [1995], and [we were], like, 'Okay, this is it. Let's focus on this. And let's focus on this concept. And let's expand a little more.' But going back to 'Soul Of A New Machine', even having clean vocals on such an aggressive record, a lot of people were, like, 'Woah! What's that?' You know what I mean? Which [referring to the mixture of clean and aggressive vocals over extreme music — Ed.] has become the norm today. But when we did 'Demanufacture', that's when we discovered our sound, that's when we really discovered, like, 'Okay, this is who we are.' And, of course, FEAR FACTORY has always done a lot of remixes and taking things even further. But nowadays, me and Burton [C. Bell, FEAR FACTORY vocalist] are not exactly trying to rewrite the script, we're not really trying to change our sound, we're just trying to write amazing songs. I mean, because we feel that we've discovered who we are and what our sound is. Now it's just, 'Okay, write great songs,' and that's what we focus on."

The band last year completed a U.S. headlining tour on which it performed its classic second album, "Demanufacture", in its entirety.

A new FEAR FACTORY studio album is tentatively due before the end of the year.

As previously reported, Cazares will take part in a question-and-answer session at the California College Of Music in Pasadena, California on February 16 at 6 p.m. The event is free and open to the public.