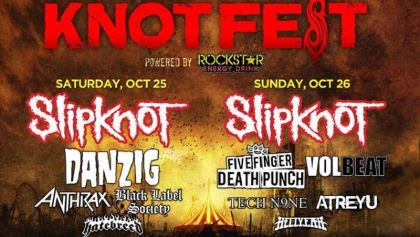 As previously announced, SLIPKNOT will close Stage 001 both Saturday and Sunday, with unique sets each night, featuring brand new music and an entirely new stage set and experience.

All Knotfest ticket purchasers will receive a digital copy of SLIPKNOT's forthcoming album, to be delivered on release date.

Knotfest — powered by Rockstar Energy Drink — will feature a SLIPKNOT-curated lineup of over 60 bands performing on five stages on Saturday and Sunday, as well as a Friday night VIP Pre-Party Bash with band performances and other activities for those that have purchased VIP or Camping Packages.

The current Knotfest U.S. band lineup by stage is as follows:

TESTAMENT
CARCASS
MAXIMUM THE HORMONE
KING 810
MAN WITH A MISSION

OF MICE & MEN
DEVILDRIVER
VEIL OF MAYA
NOTHING MORE

Every Knotfest has been a fully immersive experience for fans, and this one ups the ante. In addition to performances from more than 60 of the heaviest bands on the planet, attendees will descend into an apocalyptic underworld featuring over 20 festival attractions including a Slipknot Museum (curated by the band),carnival rides, a zipline across the festival grounds, drum circles, a massive display of fire, freaks, fire-breathers, stilt-walkers, and much more.

Knotfest tickets are on sale now at www.knotfest.com. A limited number of VIP packages are still available. Camping packages are sold out.