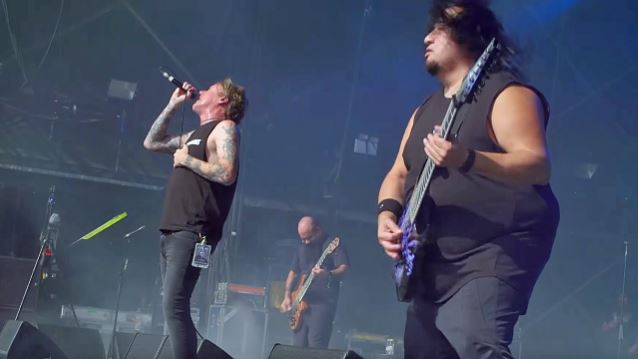 Professionally filmed video footage of FEAR FACTORY's entire performance at this year's edition of the Bloodstock Open Air festival, which was held August 11-14 at Catton Hall, Walton-On-Trent, West Midlands, United Kingdom, can be seen below.

FEAR FACTORY guitarist Dino Cazares recently confirmed that the band will celebrate the 20th anniversary of its 1998 album "Obsolete" by performing the LP in its entirety. The plans follow on from the band's recent "Demanufacture" shows, which saw FEAR FACTORY playing its landmark 1995 release from front to back.

Speaking to EonMusic, Cazares said about the prospect of marking "Obsolete"'s anniversary with a full tour: "For sure, one hundred percent, it will happen." Before then, however, FEAR FACTORY will focus on making a new album, to be released sometime "next year, and then it will be coming up on the 20-year anniversary of 'Obsolete'," he said. "2018 is the anniversary, but we might start a little earlier [with the 'Obsolete' shows] than that. We'll see."

Dino added that he was looking forward to the "Obsolete" performances, stating: "That was out biggest record by far, and I think it's going to draw a lot of people."

"Obsolete" remains the only FEAR FACTORY album to have achieved gold status in the U.S., driven largely by the success of its fourth single, "Cars", a Gary Numan cover that featured Numan himself on vocals.

In an interview with Metal Assault, Cazares talked about the challenges of playing entire records as part of a live show. He said: "Albums are not necessarily made with keeping in mind that they could be played live in their entirety, but you're hoping that you can get a record that flows really well. For instance, SLAYER has 'Reign In Blood'. The album is 28 minutes long. Sometimes when you hear 'Angel Of Death', you want to hear the next song, and the one after that. But, basically, you're hoping that the record is that good from front to back that people want to hear the whole thing. We got lucky with 'Demanufacture', as we felt that this was the case.

"Playing 'Demanufacture' is really cool because it brings us back to the memory we have of when we made that record. It brings back everything we had to go through, whether it was difficult times or happy times.

"Sometimes when we're playing that album from front to back, all these emotions come out, and it's a good feeling. You're happy that people are feeling the same way and they get into it, and they love it."