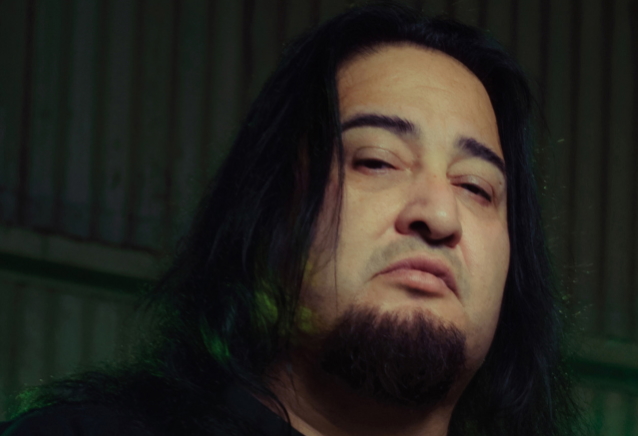 FEAR FACTORY guitarist Dino Cazares has once again defended his decision to launch a GoFundMe campaign to assist him with the production costs associated with the release of the band's long-awaited new album.

Last week, FEAR FACTORY singer Burton C. Bell, who has fronted the group since its inception, posted a message on his official Facebook and Instagram saying that he is "not part of" and isn't "benefiting" from any GoFundMe campaign. He added the hashtag "#fearfactory". This led to confusion among some of the FEAR FACTORY fans, especially since Dino had already indicated that Bell's lead vocals would be featured on the upcoming record.

After issuing a statement on Friday clarifying his motives in asking for outside donations, Dino was accussed by some fans on social media of being dishonest with respect to where the GoFundMe monies would be going, particularly since Bell alluded in a social media post that Cazares was looking for help with covering his legal fees and called Dino's fundraising efforts a "scam."

On Monday (September 14),Dino once again took to his social media to reassure fans that funds raised through the GoFundMe campaign would be used toward the making of the new FEAR FACTORY album and to express his excitement about how the LP was turning out.

He wrote: "Despite what you may have heard about the FEAR FACTORY GoFundMe page, it is not a scam or created to pay anyone's personal legal fees.

"A lot of people have jumped on the negative bandwagon that some of you fail to see the truth. I've taken some of the most harshest criticism about me, some coming from members of the band, some from ex members of the band and from fans.

"I don't understand why [there is] all this senseless drama, because at the end of the day, we all want the same thing and that is to enjoy a badass FEAR FACTORY record that is going to benefit us all.

"I'm going to tell you the truth about this album. Three years ago, in 2017, we finished a album that was given to the record company complete with artwork. This record may have never seen the light of day because of all the legal issues that were surrounding the rights to the FEAR FACTORY name.

"After I regained my full rights to the name, I decided to take this three-year-old album and make some much-needed improvements. Thanks to all the donations that we've received so far we are able to hire the same production crew that we've had on 'Genexus'.

"All I want to do is make this record the best record it could be with some amazing people working on it. It deserves a killer production to make this a classic FF album. I'm so excited for everyone to hear it because it really sounds amazing.

"It's that simple. That is all I wanted to do.

"Despite all the shit I'm getting, I still love you all and I'm not mad at anyone."

In a November 2018 interview, Bell said that FEAR FACTORY had completed a new album tentatively titled "Monolith". He also said that "legal technicalities" needed to be sorted out before the record could be released. The effort will mark the Californian band's first collection of new music since 2015's "Genexus" LP.

Despite what you may have heard about the Fear Factory gofundme page It is not a scam or created to pay anyone’s...