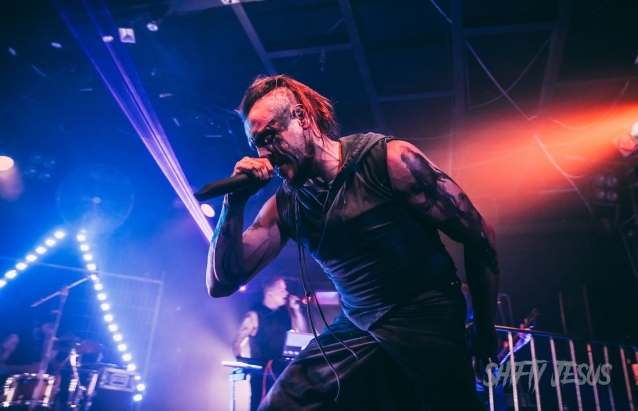 FEAR FACTORY guitarist Dino Cazares makes a guest appearance on "Hitech - Lowlife", the new single from New Zealand's KAOSIS. Released on April 15 via France's Atypeek Music, the track conjures up images of James Cameron's Terminators battling in a war-torn futuristic soundscape, but the inspiration for the track is far more human. The collaboration between Cazares and KAOSIS was fluid and was completed over several file-sharing sessions.

"Dino was sent the basic drum progressions, and a week later, we had these heavier-than-god guitar tracks," said Vivivi (guitar/synth). "The collaborators' vision for 'Hitech – Lowlife' was intuitively synergetic."

The accompanying music video was directed by Xen and features Cazares appearing as a hologram against the backdrop of an '80s sci-fi throwback theme. Ending with an unexpected plot twist, the narrative of the music video features an isolated person seeking violent refuge in a virtual reality of torture, violence and rape.

"I think most people will take this video the wrong way. There are positive questions being raised in the narrative," said vocalist Xen.

"Our sound is about breaking down barriers, not re-enforcing stale stereotypes," said drummer Dvoid. "Atypeek 100% supports our bold new vision for metal and that means a lot to us and our fans."

KAOSIS enigmatically emerged out of the New Zealand underground music scene in late 2017 and is a cocophonic, live experience that feverishly focuses on providing a uniquely entertaining and hyper-energetic show. Sonically, KAOSIS fuses metal, punk, horrorcore and dubstep into a vortex of bass and distortion.