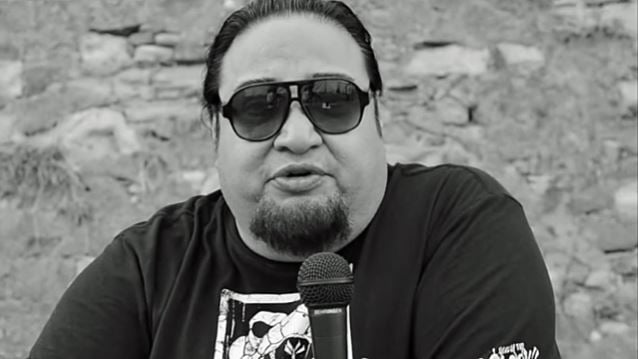 FEAR FACTORY's DINO CAZARES: 'I Am Fat. So What?'

Podrooom Videos conducted an interview with FEAR FACTORY guitarist Dino Cazares on July 12 at the Exit Festival in Novi Sad, Serbia. You can now watch the chat below.

Asked if he has read any funny comments about himself on the Internet, Dino said: "I try to read as many comments as I possibly can. I mean, obviously, there's so many different sites, so it's hard to red every one of them, but I do read the ones that are on the Facebook page, and I do read the ones that are on the Twitters and the Instagrams. And, you know, Blabbermouth. I read the comments there. I read 'em everywhere. I read a lot of funny comments about myself. It's usually comments about me being fat. But whatever… it's, like, I am fat. So what? It doesn't matter. I enjoy what I do, I play guitar, and that, to me, is what matters."

He continued: "When you're playing in a band, you have to have thick skin, because everybody… When your band puts out the first record and you start getting more known, you're under scrutiny and everybody's gonna make fun of you. And, obviously, with the Internet, anybody can leave any kind of comments that they want. It doesn't matter. You know what I mean? So you kind of have to have thick skin to be able to let… don't take these comments personally. Usually, when people make fun of me personally, I don't take it personally. But when they talk crap about the music, then I take it personally."

The "Dielectric" video was filmed with director Ramon Boutviseth, who has previously worked with TRIVIUM, NONPOINT, DARKEST HOUR, INCUBUS and ALL THAT REMAINS, among others.

FEAR FACTORY recently parted ways with bassist Matt DeVries (previously of CHIMAIRA, where he played guitar, and SIX FEET UNDER) and replaced him with Tony Campos (ex-SOULFLY, STATIC-X, PRONG, MINISTRY).