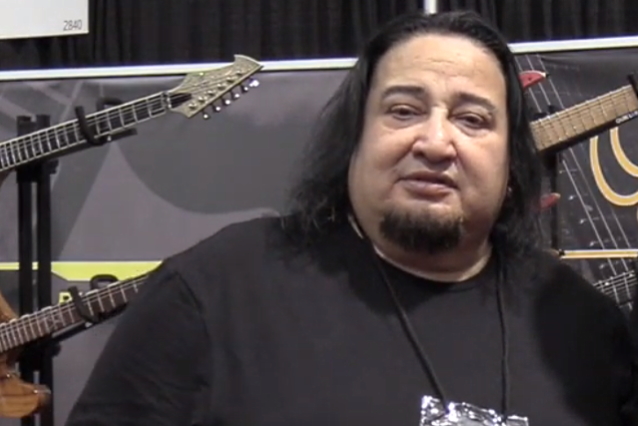 Alex Haber of Heavy New York conducted an interview with guitarist Dino Cazares of veteran industrial metallers FEAR FACTORY at this year's NAMM show in Anaheim, California. You can watch the entire chat below. A few excerpts follow (transcribed by BLABBERMOUTH.NET).

Dino: "Definitely ASESINO [his grindcore side project]. We're working on a new record. We have a lot of it already written. We're going to put it ourselves. We just got to get it done by this summer."

On the evolution of FEAR FACTORY's sound:

Dino: "We definitely tried to experiment with our sound. If you look at 'Demanufacture', it's much more cold — [it] had a killer, sleek, cold production to it. Whereas 'Obsolete', we wanted it to be groovier, more organic. So we've always tried to take different approaches on each record."

On whether FEAR FACTORY's lyrics try to be informative or are open to interpretation:

Dino: "Both. Some it is however you want to interpret it. Some of it is very specific. Obviously, FEAR FACTORY is a band that always sang about futuristic technology and how technology is going to become a part of our day-to-day life, which it has. We've always talked about those futuristic concepts that pretty much came true."

On whether some of FEAR FACTORY's lyrics have ended up predicting the future:

Dino: "We were also reading a lot of books, a lot of magazines, a lot of stuff online. A guy like Ray Kurzweil. We followed him a lot, listened to him a lot, and a lot of his futuristic ideas. Him predicting the future and that's kind of like where we got our inspiration from, lyrically."

In a November 2018 interview, FEAR FACTORY singer Burton C. Bell said that the band had completed a new album tentatively titled "Monolith". He also said that "legal technicalities" needed to be sorted out before the record could be released. The effort, which is expected to once again be made available via Nuclear Blast, will mark the Californian band's first collection of new music since 2015's "Genexus" LP.

FEAR FACTORY has been largely inactive since the completion of a 2016 U.S. tour on which it performed its classic second album, "Demanufacture", in its entirety.

The band was the subject of breakup rumors in May 2017 when the band's former bassist-turned-guitarist Christian Olde Wolbers posted a since-deleted eulogy for FF on his Instagram. He wrote "RIP Fear Factory" and appended that post with the hashtag #GrownAssMenThatCantWorkOutShit.