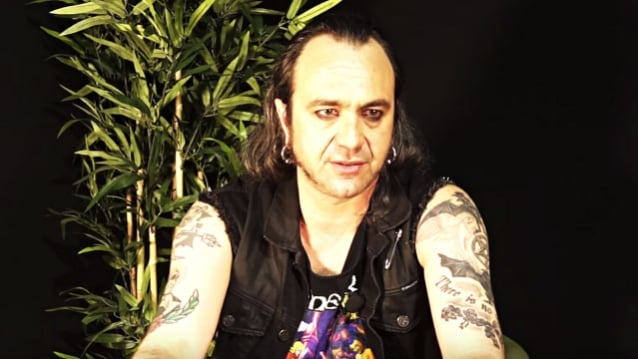 FERNANDO RIBEIRO On MOONSPELL: 'I Don't Know If The Future Is Dark Or Not, But It's Also Not Bright'

Loud TV conducted an interview with frontman Fernando Ribeiro of Portuguese metallers MOONSPELL at this year's Hellfest in Clisson, France. You can watch the entire chat below. A few excerpts follow (transcribed by BLABBERMOUTH.NET).

Fernando: "Yeah, I think with the last album, we tried to invest more in the storytelling. Thus the symphonic parts. A lot of people use symphonic [elements], but it seems they're just repeating themselves. I think the symphonic parts and everything there was made, the theater modes, the atmosphere, the flashlights, whatever, they really contribute to tell the story of the [Lisbon] earthquake [of 1755], and that's what MOONSPELL wants to do with every album. First, in the studio, then to get people into an atmosphere. I've seen a lot of metal shows, but one thing I always did, was to see theater shows. Sometimes metal is just the guy gets in, head bangs furiously, the guy gets out. There's so much more, especially like the older bands, they are very theatrical, like [IRON] MAIDEN, VENOM, and nowadays, there is theater, but sometimes it's bad theater, so you have to learn how to do it. I think with MOONSPELL, the fact that we are always interested and open to other forms of art to incorporate them into our music, it really helps us. Once in Portugal, I even went as far as making theater myself with a big band, with horns and flutes and oboes, and all kind of stuff. I learned a lot from that process as the frontman for a metal band. Sometimes, I really like the frontman in the band to go there and tell people a story. KING DIAMOND is the best example, I would say. I think that's great when you are [watching] someone play live, it's great also to have someone to mosh around to, or do the Viking row-boat and wall of death, but I think it's important for festivals to have theatrical bands as well. People are like, 'Well, I've seen five bands doing this. Let me go see something different.' I think that's why we are here. Us, CARACH ANGREN, CRADLE OF FILTH. I've seen KING DIAMOND a couple of times and it's mind-blowing. It's really great. I've seen them with different setlists as well. Nowadays, he plays more of 'Abigail', which is one of my favorite albums. 'Fatal Portrait' and 'Abigail'. But I really like some of his stuff like 'The Spider's Lullabye'. He's talking about theater, he's the king of that. Obviously, we have Alice Cooper, but for our generation, KING DIAMOND is our [John W.] Frick. He's something I grew up listening to a lot of KING DIAMOND. I am always fascinated because he's one of those artists that puts out an album and I cannot pick songs. You have to listen to the whole thing so you can get a grasp of what he's telling with the story. There's so many movies being made and fucking Netflix and everything, why don't they make a movie of 'Abigail'? It's such a good plot. I read it many times and I think people should make a movie about it."

On the quote from guitarist Ricardo Amorim that MOONSPELL may break up in the near future:

Fernando: "I agree with him. Ricardo is a smart guy. You have to see something, like we were talking about Hellfest. With MOONSPELL, the years are very heavy, because even though we think and we know that we sell records, and we're not a major band, but we're not a very small band, sometimes we have situations of being the underdog that's really heavy. We come here, and everybody loves us, but I don't know what the big deal is not coming here. It's not a money thing; we're not AMON AMARTH or RAMMSTEIN — we're quite cheap. Or MANOWAR; we're way cheaper. The thing is that Ricardo is completely right. It's not that MOONSPELL is going to be over in a couple of years — we don't know. Ricardo doesn't know. I don't know; Mike [Gaspar, drums] doesn't know. With us, it's not about the career or the money or the labels, or even playing the festivals. It's about the music we do — when that creativity stops, which is not stopping. It's just every band has a position in the music business. Our position is this: we don't rush, we don't do albums to go on tour, we don't do albums to go on festivals. It's harder? Yeah. You get more criticism? You do, yeah. I always believed music is about freedom; I wanted to do whatever I wanted. If the guy from the label comes and says, 'You can't do this,' I say, 'Fuck off. You're a label guy. You're not a musician.' Or if you're a frustrated musician, you're a label guy now. I'm also a label guy now in Portugal. I have my own label and I'm a frustrated musician. I know it comes around and we will have to end. The future of MOONSPELL is a question of relevance. It's not the crowd relevance is important. If you do this professionally, you have come to the festivals and play the shows, but if the crowd relevance is still not here, we will still for sure release music and not play live. We like that and that's why we are here. I don't know if the future is dark or not. But it's also not bright. The future of MOONSPELL is struggling to get to the festivals, to get to the people, even though when we came here, everything is fine. That's our thing and that's what gets us tired, definitely."

On whether the band has immediate plans for their next studio album:

Fernando: "No. I mean, we are searching for a new idea. When we have it, for sure, we're going to do it really fast, but we are not really concerned about the new album right now. We're going to tour with ROTTING CHRIST. It's going to be a big tour. Maybe on tour we're going to exchange some ideas. I don't know, maybe next year, we're going to record the new album. So far, it's not like we are really having something to tell about it yet."

The band's "Lisboa Under The Spell" live DVD/CD was released last August via Napalm Records. The live DVD/Blu-ray/3CD package captures MOONSPELL's performance before 4,000 fans at the sold-out Campo Pequeno arena in their hometown of Lisbon, Portugal on February 4, 2017.