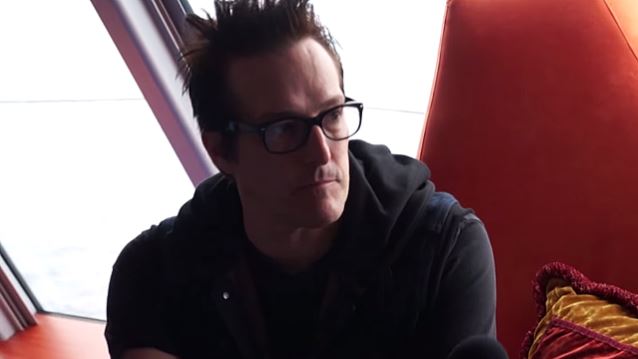 All Access Live conducted an interview with FILTER during this year's ShipRocked cruise, which sailed roundtrip between Port Miami and Great Stirrup Cay in the Bahamas February 2-6 onboard Norwegian Pearl. You can now watch the chat below.

Speaking about FILTER's plans for the follow-up to 2013's "The Sun Comes Out Tonight", the band's mainman, Richard Patrick, said: "We are deep, deep into our seventh record. We don't even have a title for it. It's greenlit by Wind-Up Records. They've sent the funds and got me sitting in the studio."

He continued: "I'm using different people this time. I went back to Brian Liesegang for a couple of tracks, I used Ben Grosse for a couple of tracks. Blumpy [Michael Tuller] from NINE INCH NAILS, who also worked on 'Title Of Record' [1999] before he was in NINE INCH NAILS. And so, it's, like, all of those guys were in NINE INCH NAILS at different periods than I was. I was the first one. Then I left. Brian came in. Then he left and did 'Short Bus' [1995] with me. And then Blumpy came in after I did 'Title Of Record' and 'The Amalgamut' [2002] and worked with [NINE INCH NAILS mainman] Trent [Reznor]. So it's, like, we're just swapping people. But there's this new cat, and he comes from Australia. He was voted, like, the greatest guitar player ever in Australia in 2014 or something, which is odd, because he doesn't play that much guitar in what we're doing; it's all industrial."

Patrick added: "Right now I'm calling this new… There's the old FILTER sound, the classic… There's gonna be, like, seven songs where it's, like, the old classic FILTER sound with Brian and Blumpie. But this new batch of tunes that I'm writing I'm calling 'new industrial,' 'cause it's… It's a totally brand new form of our music, so… I think it's new for any music."

FILTER's sixth studio album, "The Sun Comes Out Tonight", was released on June 4, 2013 via Wind-Up Records. The CD was recorded in Los Angeles at Blue Room studios with producer Bob Marlette (BLACK SABBATH, ATREYU, SALIVA). The follow-up to 2010's "The Trouble With Angels" was written and recorded by Patrick and Radtke, as well as collaborator Marlette. There are also performances from touring members Jeff Friedl and Elias Mallin (drums) and Phil Buckman (bass).