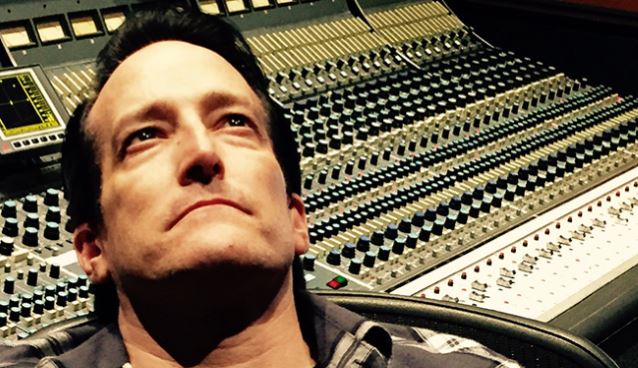 FILTER mainman Richard Patrick spoke to Mick Stingley of Uproxx about the progress of the recording sessions for the band's follow-up to 2013's "The Sun Comes Out Tonight", tentatively due next spring via Wind-Up Records.

"The most important thing that I have to say about the new music is that it's way more present-tense- and future-oriented. We get lumped in as more of a rock band, and rightly so, especially with our last couple of releases; but this is where we are in the 21st century. It's so much more cinematic."

He continued: "A while ago I referred to it, somewhat jokingly, as nu-industrial, and some people were excited by that and it kind of stuck. What we're doing right now is a new industrial sound. I've really been pushing my boundaries and I want to take industrial to another level and create a sound that has some guitar and symphonic elements, but also has clanging metal. I was really just trying to be as original as possible."

FILTER's forthcoming album stretches towards social and political themes in a way we never knew possible of Patrick in the past. Among the tracks set to appear on the CD is "Nothing In My Hands", which was written around Ferguson and the Michael Brown shooting, but it could be applied to any of the many race-related tragedies involving police brutality that have swept the country in recent years.

"This shit is happening all the time… All these black kids getting killed, and for what?" he said. "It's not just something to sing about because it's dark: not one fucking rock band is reflecting this stuff. I want to write songs about social matters. I have to say something about what's going on in this corrupt world we live in."

Patrick also talked about FILTER's current lineup, which, he says, consists of "really young, talented kids." He said: "Chris Reeve is probably the best drummer I've ever seen. He’s just a tremendous talent. Our new bass player, Ashley Dzerigian, worked with CeeLo and Adam Lambert, and she's amazing. She plays like John Entwistle. We have a keyboardist, Bobby Miller — DJ Rotten Bobby. We call him a DJ because we know what era we live in. And Oumi Kapila, another Aussie, is a virtuoso on guitar. These kids are great. We've been playing a few dates here and there, and the energy they bring to the shows really forces me to be that much better."

Read the entire interview at Uproxx.