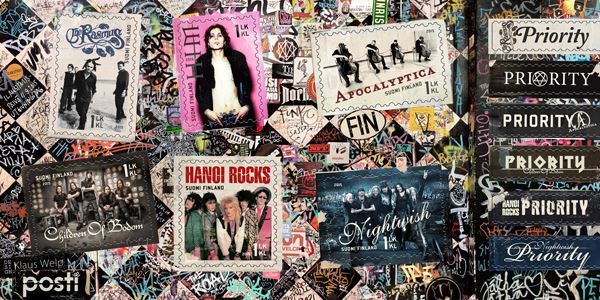 Finnish Postal Service To Honor NIGHTWISH, CHILDREN OF BODOM, APOCALYPTICA, HIM On Stamps

Finland's postal service, Posti, will release nine new stamp publications in September-November, with a total of 35 different stamps. The stamps will feature musical themes ranging from Sibelius to hard rock, including six internationally successful Finnish rock bands that got to where they are today through a great deal of determination and perseverance.

The Finnish invasion of the global rock music scene began with HANOI ROCKS back in the 1980s. The other bands featured in the stamps are THE RASMUS, HIM, APOCALYPTICA, CHILDREN OF BODOM and NIGHTWISH.

"For each stamp, I selected a band photo and a logotype that together resemble a band poster," says Klaus Welp, the graphic artist that designed the Million miles away sheet. The background of the sheet depicts the green room backstage in the legendary Tavastia rock club, which Welp describes as an archaeological treasure of Finnish rock 'n' roll.

Heavy metal and hard rock music continues to thrive in Finland, where bands like CHILDREN OF BODOM regularly top the chart with their single and full-length releases.

Some claim that Finland is "the only country in the world where metal is mainstream," and people actually study Finnish and Norwegian to better understand heavy metal music. 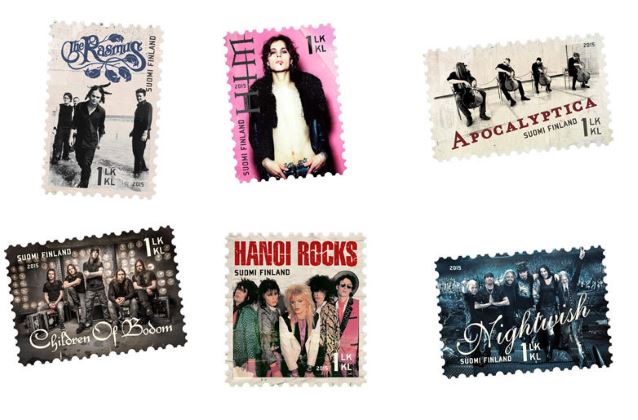