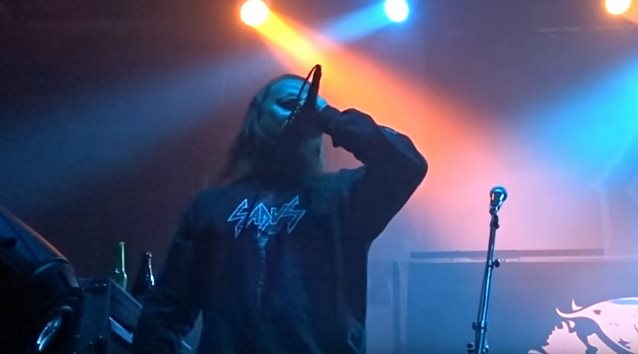 Fire Breaks Out During ENTOMBED A.D.'s Concert In Gothenburg

A fire broke out during ENTOMBED A.D.'s set at Trädgår'n in Gothenburg, Sweden Saturday night (January 30). Luckily, the flame was quickly put out by the staff and the show continued without any further interruptions.

According to RockSverige.se, the promoter said the fire was ignited by a new lamp that was used at the venue, but this has not been confirmed.

A couple of photos of the incident can be seen below (courtesy of RockSverige.se photographer Josefin Wahlstedt).

ENTOMBED A.D. is currently touring Europe with BEHEMOTH, ABBATH and INQUISITION. The trek kicked off on January 29 in Copenhagen, Denmark and will wrap on February 14 in Ljubljana, Slovenia.

ENTOMBED A.D. will release its second album, "Dead Dawn", on February 26 via Century Media. The CD production was handled by a team consisting of Tom Van Heesch and Jacob Hellner of Big Island Sound in Stockholm as well as Nico Elgstrand, who produced a majority of the tracks whereas Svante Forsbäck of Chartmakers mastered this new beast.

Posted by Rocksverige.se on Saturday, January 30, 2016