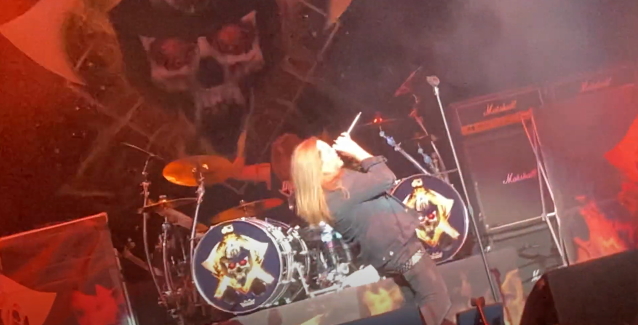 FIREHOUSE singer CJ Snare was forced to miss the band's concert Friday night (July 9) in Moline, Illinois after coming down with an undisclosed illness. Filling in for him was LAST IN LINE frontman Andrew Freeman.

Earlier on Friday, Snare took to his Facebook page to write: "So, I woke up this morning and was sick in my stomach. Headed to the doctor. Don't need prayers, thoughts, or hugs. I just need people to understand that I won't be in Moline or Ashland to do the FIREHOUSE shows. My apologies to everyone involved. Our good friend, Andrew Freeman will be singing in my place for the weekend and I hope that you all welcome him at these shows. Please, have fun. I'll be back next week singing in Ohio. Big love to my band and all of our listeners. RAWK ON !!! See ya next week."

In addition to playing with LAST IN LINE, Freeman has performed with three of BULLETBOYS' original members (guitarist Mick Sweda, bassist Lonnie Vencent and drummer Jimmy D'Anda) in LIES, DECEIT & TREACHERY and famously filled in for Joe Elliott when DEF LEPPARD played on the "Hysteria On The High Seas" cruise in January 2016.

FIREHOUSE hasn't released a studio album since 2011's "Full Circle", which featured re-recorded versions of some of the band's older songs. The group's last collection of new material, "Prime Time", came out in 2003.

FIREHOUSE reached stardom during the early '90s with hits like "Reach For The Sky", "Don't Treat Me Bad" and "All She Wrote", as well as its signature power ballads "I Live My Life For You", "Love Of A Lifetime" and "When I Look Into Your Eyes".

So, I woke up this morning and was sick in my stomach. Headed to the doctor. Don’t need prayers, thoughts, or hugs. I...