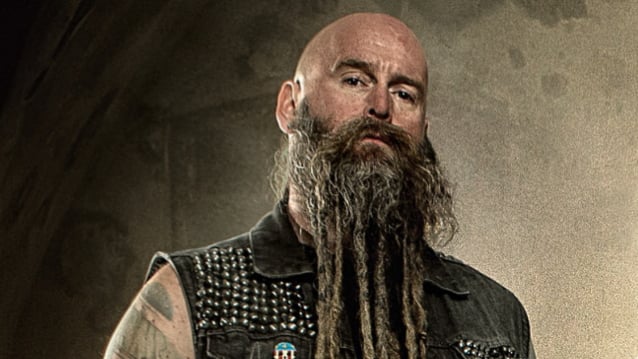 FIVE FINGER DEATH PUNCH Bassist Is 22 Months Sober: 'It's Been An Incredible Turnaround In Life'

During a December 6 appearance on the "Kentucky Sports Radio" show on Louisville's Talk Radio 1080 (WKJK-AM),FIVE FINGER DEATH PUNCH bassist Chris Kael revealed that he has been 22 months sober. "Our lead singer, Ivan [Moody], he's 21 months sober, right behind me," Chris said. "So, once I got sober, he was trying to go through it as well. We've really been leaning on each other a whole lot. If we can do it, in rock and roll, you guys can do it. Trust me. It's been an incredible turnaround in life. 22 months ago, knowing how I felt back then versus how I feel now — it's amazing. I cannot go back.

"I was doing this whole addict thing, where I had nine months," Kael admitted. "I was, like, 'Okay, at one year, I'm gonna re-evaluate. Maybe I'll have an Old Fashioned [Pale Ale]' — that was my thing; Old Fashioned — 'I'll have that.' But nine months hit, and that's when the first milestone was. I was, like, 'If I feel this good at nine months, why would I introduce that back into me at all?' It works for some people; it wasn't working for me. And now I'm spreading the word. I try to be the positive guy that everybody knew me to be originally, and I fell off the earth with addiction. And now I'm back."

Kael was not the first member of FIVE FINGER DEATH PUNCH to publicly discuss his struggle with addiction. Drummer Jeremy Spencer, who left the band in December 2018, got clean and sober eight years ago after a particularly bad episode of drug and alcohol abuse, saying that he didn't want to let his parents down after achieving the kind of success he dreamed of as a kid. Moody's own substance abuse has caused him to miss a couple of the band's tours, with the singer later apologizing to fans and revealing that he had been in a treatment facility "addressing the addiction issues that have interfered with everything in my life."

Chris said that he had feelings of guilt over the way Moody was publicly battling his addiction while he was silently dealing with issues of his own. "Ivan was going through his thing, and me, no one really knew, I was the quiet one that was kind of doing things on the side," Kael said. "That was one of the things that was eating away at me too — my guy had a huge problem, and here I am, a quiet problem. It hit me hard when I got off the road. Going home was always hard anyway, 'cause you've got so much stimulation out on the road, and then you come home and you're, like, 'Wait a minute? I've gotta take out the trash? That's the biggest part of my job now?'"

Kael first revealed his battle with addiction in a series of tweets, saying that his then-wife played a "major role" in helping him get clean. "Had she not busted me trying to restock after burning through $1300 in blow in two days in late January [2018], I truly believe that I would not be here today," he wrote. "She has silently and bravely dealt with far more than what would have crushed any other woman. Her loyalty, patience, TRUE love and resolve are unmatched by any other woman I've ever known." (The couple has since apparently split.)

Kael also said: "Throwing my hands to the universe and admitting I was at a fucking low and no longer able to do it myself was one of the most humbling and powerful things I've ever done in my life."

FIVE FINGER DEATH PUNCH kicked off a U.S. headlining tour last month with THREE DAYS GRACE, BAD WOLVES and FIRE FROM THE GODS that next stops on Wednesday night (December 11) in Madison, Wisconsin.