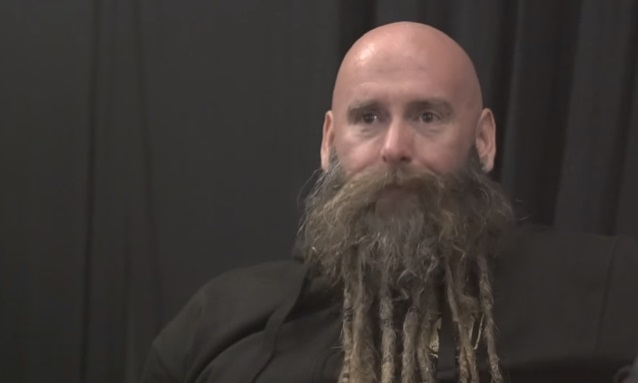 FIVE FINGER DEATH PUNCH has confirmed a December 1 release date for its greatest-hits collection, "A Decade Of Destruction", and has released one of two new tracks included on the album, a song called "Trouble". The other new song included with the set is titled "Gone Away".

The hits collection and an already completed new studio album are part of a deal to settle a legal dispute and close out the band's contract with its label, Prospect Park.

FIVE FINGER DEATH PUNCH's seventh full-length LP, which was finished nearly a year ago, will follow up 2015's "Got Your Six" and will be released in spring 2018.

FIVE FINGER DEATH PUNCH bassist Chris Kael told Finland's Kaaos TV that choosing the two new songs to include on "A Decade Of Destruction" "was a very complicated, very involved decision. 'Cause if you're putting the two new songs on the greatest-hits [record], you don't want that to take away from the full-length album that's coming out behind it," he said (see video below).

"We always try to make the record flow — so, you know, you have a heavy song, a heavy song, something a little lighter, so and so," he continued. "But, yeah, it's an important decision not to take away from the soundscape of the main record."

According to Kael, he and his bandmates fought to get some new music on the "Decade" collection because "if you have iTunes, you can already program your own greatest hits. Now, why do you need to [release a greatest-hits album]?" he said. "But it's exciting to be able to put out two brand new songs on that compilation. So, for us, that was the benefit of doing it — the ability to get two brand new songs out to the fans, however we can possibly get it out there."

As for FIVE FINGER DEATH PUNCH's upcoming full-length album, Kael said that the disc will include one track that he describes as his "new favorite FIVE FINGER DEATH PUNCH song. I won't say what it is. You guys know me; I like heavy stuff, so you know it's gonna be a heavy song," he said. "But when I first heard the finished product in the studio… I heard the music before, when we went in, and then [singer] Ivan [Moody] comes in and adds his stuff to it. And when it got sent to me, I was, like, 'Oh my God! He is so angry.' There's such a vitriol in this song. And I was, like, 'Ahhhh… Ivan, welcome back, man. Welcome back.'"

Kael admitted that his listening habits tend to gravitate toward the more aggressive music — much more extreme than the stuff his band usually plays. "That's just my own personal preference," he said. "I listen to bands like CODE ORANGE, NAILS — hardcore punk rock and death metal-type stuff. So that's kind of where I come from. So, personally, I love the heavier stuff. But there's something about being able to write that song that reaches so many people that can get you to fill an arena. Playing clubs is fun, but there's a whole different vibe. And it's hard to write a song like that. I can… Heavy stuff? All day long, all day long. But something that's toned down a little bit that can reach a bigger audience, which gives you the chance to kind of positively affect lives of more and more people, that's hard to do, man. It's hard to write a hit song."

FIVE FINGER DEATH PUNCH is currently taking part in a European arena tour with IN FLAMES and OF MICE & MEN.