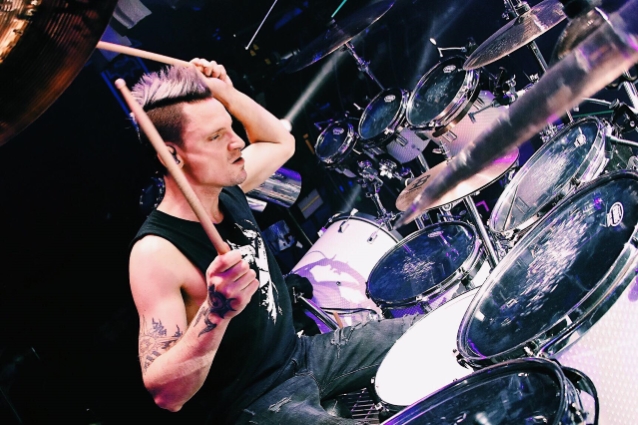 During an appearance on the latest episode of Doc Coyle's (GOD FORBID, BAD WOLVES) "The Ex Man" podcast, FIVE FINGER DEATH PUNCH drummer Charlie "The Engine" Engen spoke about how he landed the gig as the replacement for FIVE FINGER's original drummer, Jeremy Spencer.

Spencer, who co-founded the band with guitarist Zoltan Bathory, underwent back surgery in the fall of 2018 that required a significant recovery period. In announcing his exit from the group, he said: "The rigorous physical wear and tear has worn down my body to the point where I feel I can no longer deliver a performance you great fans deserve and one that brings me satisfaction and joy."

According to Engen, it was Spencer who first reached out to him about possibly stepping in for him while he recovered from his operation.

"Me and Jeremy had known each other for probably a year and a half or something, just through social media," Charlie said. "He liked my playing a lot. We would talk randomly about drum stuff or life stuff a little bit, about music industry stuff. And he was saying stuff even early on, like, 'I wanna get you a good gig, man. You've gotta be on the big stage.' And I have a feeling at this point, everybody already knew it was in the works, but I didn't know. So I was just thinking, 'Yeah, that'd be awesome. If something comes up, definitely let me know.' Anyway, then Jason [Hook, FIVE FINGER guitarist] got in touch with me, and this was May of 2018. And we just talked about music and whatnot. He kind of gave me a little insight of, like, 'Hey, you never know what'll happen down the road here.' 'Cause Jeremy's back had been bugging him for a while at that point already. And the summer kind of went through… [A short time later] I saw my phone blowing up next to me, and it was from Zoltan. And by this time I had talked to Zoltan too. It was Jason, Zoltan and Jeremy all, like, 'Hey, call me.' And I was gonna go hang with those boys the next week in Chicago, 'cause I'm only six hours from there. So I was just gonna go to the show. And they were, like, 'How about you learn some tunes and come down and jam on stage with us, and let's see.' This was Jeremy talking. 'Because I need to back out of the fall tour, and I want you to be the guy.' So I'm, like, 'Oh, shit.' You know, like, 'Okay.' … So I went down there, played, like, three tunes with them. And it was I feel like what you would call an assumed audition, where it was an audition, but it was mainly to make sure I wasn't a weirdo, 'cause I spent, like, three or four days with them. And then to make sure I could play, obviously. So it was really seamless. And then I went home, started working on the tunes and then we did that fall tour then, two months later or whatever it was."

Asked if it was a bit of a "culture shock" joining an arena-level band after playing clubs most of his life, Engen said: "Looking back, I would say yeah. It didn't really feel like it at the time, because I'm kind of like a nose-to-the-grindstone type of person anyway — 'if something arises, I just know I need to do it'-type mentality. So I think I did really well with it at the time. But there was a culture shock a little as far as just jumping in with the guys and not trying to step on anybody's toes. I'm walking onto — literally — a freight train moving at a thousand miles an hour that, if you're not part of it, you don't really even understand what goes on in bands that big, in a weird way… And I came from the prog club world, and it's such a different mentality to go to that big 'rock star' fire, big stage, super energy — but I've always craved that."

Bathory previously described Charlie as "an unbelievable drummer," adding that: "The funny thing was that Jeremy kind of found him, but I followed him, so when he said who it is, I'm, like, 'Oh, yeah! That kid is fucking amazing.' So I already knew about him. So that was pretty cool. So I guess you can say that Jeremy handed down the torch."

The 35-year-old Engen, who was previously identified only as "a drum prodigy" called "The Engine", played his first show with FIVE FINGER DEATH PUNCH on November 6, 2018 in Wichita, Kansas.

The Saint Paul, Minnesota-based Engen had been teaching drums for more than 15 years and offered private and Skype lessons at his home studio, along with playing in the bands SCALE THE SUMMIT and IDEOLOGY.