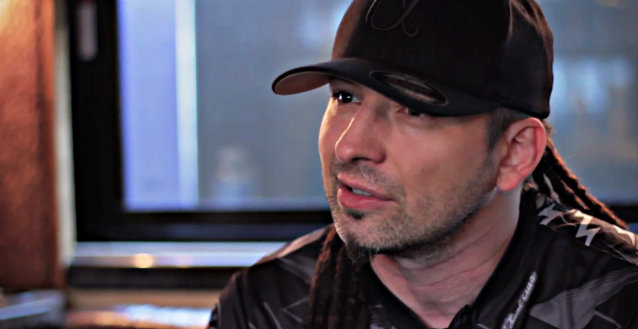 Ronan McGreevy of The Irish Times recently conducted an interview with guitarist Zoltan Bathory of Las Vegas metallers FIVE FINGER DEATH PUNCH. A couple of excerpts from the chat follow below.

The Irish Times: You are touring with AVENGED SEVENFOLD who are probably the biggest contemporary metal band in the world. Are they a model of where you want to be at?

Zoltan: AVENGED SEVENFOLD are ahead of us by five or six years, but we are putting out records nearly every year. We're catching up. I think it is a great bill for heavy metal fans. We share a huge fanbase. In the United States, we have almost caught up to them now. If I was to pick a role model for a band, I would say that role model has to be RAMMSTEIN. When I hear them, I think "holy shit." They are the bands that really push it out when it comes to the live shows. Don't get me wrong, but we love AVENGED SEVENFOLD.

The Irish Times: AVENGED SEVENFOLD seem to attract a lot of hatred from heavy metal fans who think they are not the real thing. What do you think?

Zoltan: It's a really weird time. We're the first generation of bands that have to deal with the Internet. The Internet was just growing up at the start of the 2000s. We're probably the first generation of bands where anybody who has an anonymous opinion can voice it. If you are really looking from where the hate is coming from, you will find out that it is a small number of very vocal individuals who usually troll the Internet with anonymous names. These are people that just talk shit behind an anonymous identity. Everybody gets hate nowadays. We are doing something that is fairly accessible music, it is not extreme metal. So we are going to get more popular and go on the radio. Automatically fans of extreme bands would see us as having sold out. It is kind of ridiculous. AVENGED SEVENFOLD are the same band they were since day one. We too are doing the same thing as when we started. It's not like we are making a jazz-pop record.

The Irish Times: You have an album called "American Capitalist". Is there a strong political dimension to your music?

Zoltan: We were always a band that wanted to push boundaries. When the Iraq war came, the record was called "War Is The Answer". We didn't pick a side. We're not politicians, but we wanted to push a couple of buttons. We can't preach, but we can ask questions. I can't tell fans what to think, but I can ask questions. On "American Capitalist", we did the same thing. When we were recording, pretty much the whole world was in a financial meltdown. We wanted to sort out a couple of things. There is a weird thing going on, not just in the music industry, but generally that anybody who is successful attracts a lot of jealousy and hate. The capitalist system is probably the best we have got. This is closest to nature. A free market economy, the strong survive, if you work harder, you get further. There are certain things in the system that works, but we wanted to point out how bizarre it is that success attracts such hatred. It is bizarre and it is global. This new record also has a point. It is about the fact that everything is just an opinion. "The Wrong Side Of Heaven And The Righteous Side Of Hell" means that every time you are right, you are somewhat wrong and visa versa. What you are thinking may be acceptable, but, in a different society, but in another culture, it might be completely unacceptable. Who is right and who has the right to decide who is right? Can you trust your own instincts?

Read the entire interview at The Irish Times.