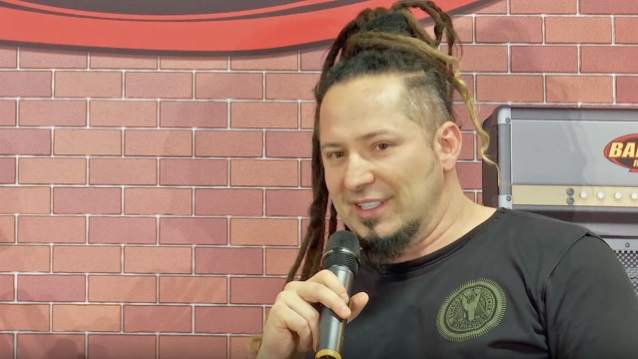 During a question-and-answer session with fans earlier today (Friday, November 17) at the Bandit Rock radio station in Stockholm, Sweden, FIVE FINGER DEATH PUNCH guitarist Zoltan Bathory spoke about the band's upcoming follow-up to 2015's "Got Your Six" album, tentatively due in April or May of next year.

"At this point, we're keeping our sound, but it's about songwriting and getting better and better songs," he explained.

Prior to the arrival of FIVE FINGER DEATH PUNCH's new full-length album, the band will release a greatest-hits collection, "A Decade Of Destruction", including two new tracks, "Trouble" and "Gone Away".

The hits collection and the already-completed new studio album are part of a deal to settle a legal dispute and close out the band's contract with its record company, Prospect Park.

"We had a little bit of wrestling match with our record label, and we settled that issue," Zoltan said. "And we had a record that we recorded maybe a year ago. To be completely correct, we finished it a year ago — last December, something like that — and we had a little, as I said, wrestling match, a legal one, but now it's settled. And what it means to us is that we're putting out this greatest-hits record and a record that we recorded then. Since that, we recorded a couple of new songs, so that's gonna be added to that, but it's all new material that you guys, obviously, didn't hear before. So because the greatest hits also has two songs, we have about… in the next six or seven months, you guys are gonna hear about 17, 18 songs that are coming out, between all the records."

According to the guitarist, FIVE FINGER DEATH PUNCH's upcoming album will contain "probably about 12" new songs "and a few bonus tracks on the deluxe edition But I'm really proud of it. Probably a couple… I would say maybe two or three of the best songs we've ever written [are] on this new record," he said.

"[Kevin is] sort of like a sixth bandmember at this point," Zoltan said. "He understands the band, and he can really… We're kind of crazy, a little bit, especially [singer] Ivan [Moody]. So he has a manner and a way of working with the band that he doesn't really wanna change who we are. He sort of gets the best of us instead of steering the boat."

FIVE FINGER DEATH PUNCH signed a new North American recording deal with Rise Records last year. They also filed a lawsuit against Prospect Park in April, asking a judge to release them from their contract and order the company to pay over a million dollars in damages.

FIVE FINGER DEATH PUNCH has also dealt with Moody's struggles with substance abuse, which forced him to miss a number of shows last year and this past spring.

The band is currently taking part in the biggest European arena rock tour of the fall. They are on the road co-headlining with IN FLAMES and special guests OF MICE & MEN.