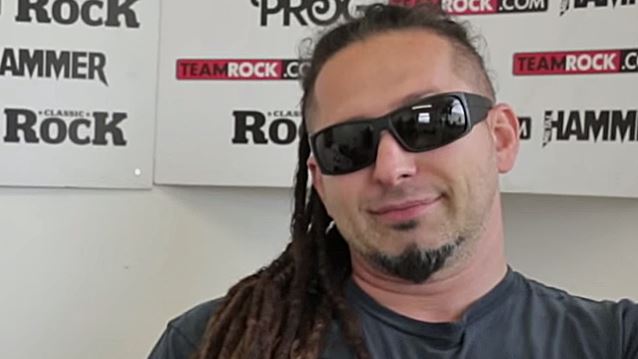 According to The Pulse Of Radio, FIVE FINGER DEATH PUNCH guitarist Zoltan Bathory appears to have thrown his support behind Republican presidential hopeful Donald Trump. Bathory has posted favorable tweets about the former real estate magnate and reality TV host, saying, "He said he will straighten out the country & if u think about it @realDonaldTrump is already delivering that promise by shooting straight," and "@realDonaldTrump is right. Communist China is giving us lessons in capitalism while we are becoming more communist than they are #theirony". He also wrote: "Watching the media taking shots at @realDonaldTrump They still don't get it ? Fighters love 2 fight. More U kick them the stronger they get."

Bathory, who grew up in Hungary when it was under Communist control, has spoken up in the past in favor of the capitalist system and against gun control legislation.

He is the first Republican-leaning rocker to express his views on the 2016 field. Others, such as STAIND's Aaron Lewis, Kid Rock, GODSMACK's Sully Erna and the members of AVENGED SEVENFOLD have yet to endorse a candidate.

FIVE FINGER DEATH PUNCH's new album, "Got Your Six", arrived on Friday, September 4 and debuted at No. 2 on this week's Billboard 200 album chart.

The band is on a co-headlining fall tour with PAPA ROACH that pulls into Eugene, Oregon on Tuesday (September 15).

. @realDonaldTrump is right. Communist China is giving us lessons in capitalism while we are becoming more communist than they are #theirony