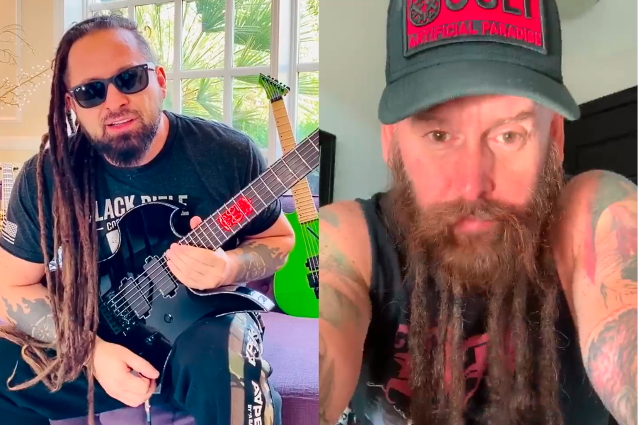 According to News On 6, a Tulsa police officer who was injured in a shooting three months ago was surprised with video greetings from two members of FIVE FINGER DEATH PUNCH.

Aurash Zarkeshan, known affectionately as Zark, is recovering at a rehab facility after being shot in the head during a traffic stop in June.

Zoltan Bathory and Chris Kael recorded special birthday messages for Zark after they were contacted by the officer's friends and family through Instagram.

"Who's your favorite band?", a loved one can be heard asking in a Facebook video shared on Monday (August 31). "FIVE FINGER DEATH PUNCH," Zark responded. He is then shown videos from Bathory and Kael.

Bathory played a few chords of "Happy Birthday" on his guitar before sharing some words of encouragement for the recovering officer.

In his video, Kael said: "Hey, Zark. A couple of friends of yours reached out and said that you had been going through some real, real shit over there. And I just wanted to send some words of support and encouragement. I can't imagine, man. But I'm here. We all go through our things. We've gotta stay out of our heads and find that strength inside to pull up and fuck these motherfuckers. So keep that inner strength going, brother. You got this. Crank up some FIVE FINGER DEATH PUNCH to inspire ya. We are here for ya, brother, we love ya, and get well soon."

After viewing the videos, Zarkeshan, clearly shocked by the gesture, asked: "How did you guys get a hold of them?"

Zarkeshan, who just turned 27, was shot on June 29 during a traffic stop in east Tulsa. Sgt. Craig Johnson, a 15-year veteran of the Tulsa Police Department, was killed in the shooting.

Following the shooting, the Tulsa community raised nearly $600,000 to support both officers' families.

The members of FIVE FINGER DEATH PUNCH have been longtime supporters of veteran and law enforcement entities. Back in 2018, the group donated a portion of the ticket sales from its summer North American outdoor amphitheater tour to C.O.P.S - Concerns Of Police Survivors, whose mission is rebuilding shattered lives of survivors and co-workers affected by line of duty deaths, through partnerships with law enforcement and the community.