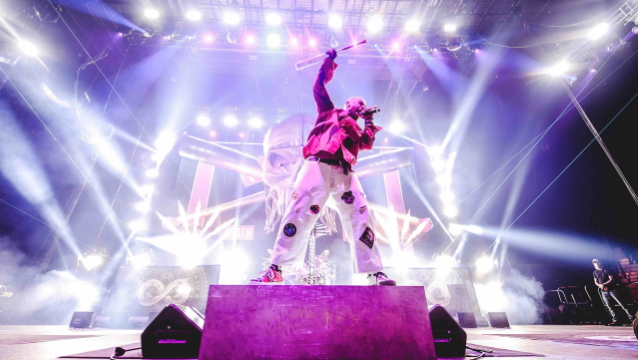 Las Vegas-based metallers FIVE FINGER DEATH PUNCH are currently on the set of new horror movie "The Retaliators", filming their parts and recording a music video for the film soundtrack.

In other news, FIVE FINGER DEATH PUNCH is celebrating yet another achievement in its career by winning the prestigious "Best Live Act" award at tonight's 10th anniversary edition of the AIM Awards.

Singer Ivan Moody, guitarist Zoltan Bathory and bassist Chris Kael share their thoughts: "We want to take a second to tell you what a tremendous honor it is to receive the best live act AIM Award 2020 and an extra special shout out to AIM for always providing growth and opportunities for independent artists and labels. We are proud to be one of them. We look forward to seeing every last one of you out on tour sooner than later. Stay safe out there, keep well!"

Dan Waite, MD Europe Better Noise Music, comments: "It's fantastic to have AIM as a backer and champion for the independent music community. AIM's knowledge support and guidance is invaluable to independent record labels. FIVE FINGER DEATH PUNCH winning AIM Best Live Act is testament to the band's passion, integrity, vision and lack of compromise when putting together global arena-filling shows. Their fans recognize that and voted accordingly. Thank you."

FIVE FINGER DEATH PUNCH's latest album, "F8", was released in February. The follow-up to 2018's "And Justice For None" capped a turbulent period for FIVE FINGER DEATH PUNCH in which Moody finally got sober after a near-fatal struggle with addiction, while co-founding drummer Jeremy Spencer bowed out of the band due to physical issues.